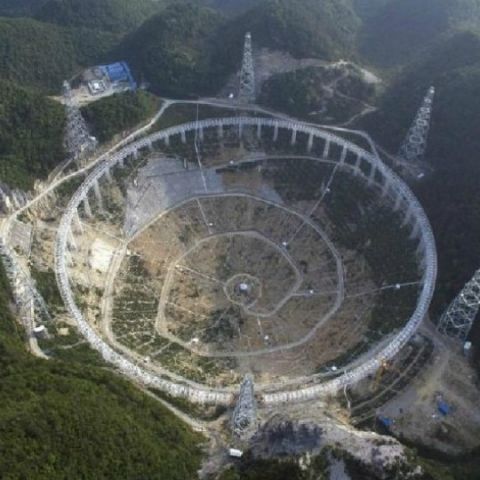 The massive radio telescope project, which China is stating will add to the comprehensive hunt for extraterrestrial life, is nearing start of operations at the expense of local residents.

In 2011, China began its work on Fast (Five-hundred-metre Aperture Spherical radio Telescope), a massive telescope unit that will aid our quest for life on the outer fringes of the universe. Fast came at a price of £127 million, and when finished later this year (by September, as per targets), will become the world’s largest observatory telescope, with a diameter of 500 metres. All of this sounds fantastic and is sure to excite the dream of E.T. life hunters, but this comes at a price. Come September 2016, and the Chinese government will force nearly 9,000 local residents to relocate from the nearby areas of Guizhou, China.

The Xinhua news agency reported the news of the impending evacuation yesterday, stating that homes that will be forced to relocate will be given a compensation of £1,275 (12,000 Yuan) by the eco-migration bureau of the Government. This move is being undertaken to ensure a safe electromagnetic environment, and prevent damage to individuals exposed to radiation. Such moves, however, are not unheard of by the Chinese government. Previously, hydro-electric dam projects and poverty alleviation schemes have led to similar relocation drives imposed by the government, leading to the affected residents claiming that they are often poorly compensated.

The Fast telescope, however, is being looked at as a scientific achievement. Once functional, the movable panels of the telescope will reflect signals from distant corners of the universe and gather them into a singular 30-tonne Retina source. As much as progress for progress's sake must be encouraged, the issue of sudden relocation being imposed upon local residents is definitely a point of concern. Necessary sacrifice, or overconfident technology?