China now has the fastest Supercomputer in the world 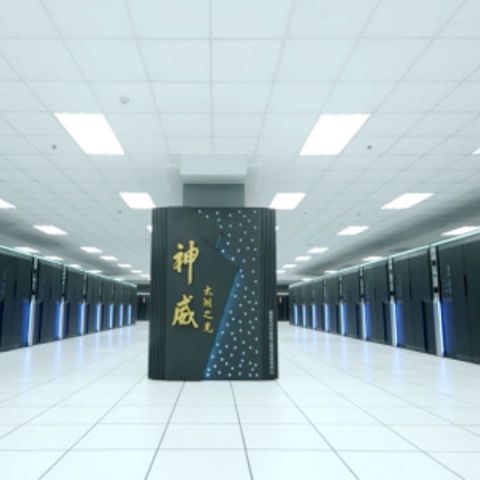 The fastest Supercomputer only uses parts designed and made in China

Chinese supercomputer, the Sunway TaihuLight, has captured the number one spot in the list of Top 500 Supercomputers compiled at International Supercomputing Conference (ISC) being held at Frankfurt. It takes the top spot from the Tianhe-2, which also is a Chinese machine. The Sunway TaihuLight has a computing score (Linpack Mark) of 93 Petaflops and outperforms the previous number one by three times. It’s almost five times faster than the fastest system from USA, which is ranked third overall. The TaihuLight uses the SW26010 CPU on each of its 40,960 nodes and is a 260-core chip that has a throughput of just over 3 teraflops, adding up to more than 125 Petaflops across the whole machine. With 93 Petaflops as the measured output, a 73% yield of total output is deemed to be respectable.

The most significant factor here is that the previous fastest supercomputer used Intel Chips, is this machine only uses home-grown Chinese chips and no technology or chips from the USA. Dr. Guangwen Yang, the Center Director, National Supercomputing Center at Wuxi, stated “As the first number one system of China that is completely based on homegrown processors, the Sunway TaihuLight system demonstrates the significant progress that China has made in the domain of designing and manufacturing large-scale computation systems,”

Each node has 32GB of RAM, adding up to be 1.3PB for the entire machine. Although it may seem significant, it is not when considering the number of cores in the machine. The TaihuLight also uses older DDR3 RAM instead of the new, more power-efficient, DDR4. Also, there’s no concept of L1, L2 or L3 cache in this machine. Each core is allocated 12KB of instruction cache and 64 KB of local scratchpad memory.

Interestingly, the machine is more power-efficient as compared to its predecessor, and draws 15.3 Megawatts(MW) of power while running Linpack, whereas its predecessor drew 17.8 MW. This can be attributed to its lesser memory as having more for a better memory:core ratio would definitely worsen its power efficiency.

China has been making great progress over the years when it comes to supercomputing. There were no Chinese machines in the Top 500 in 2001 whereas, now there are 167, which is more than the number of machines from the USA, that has 165 entries.