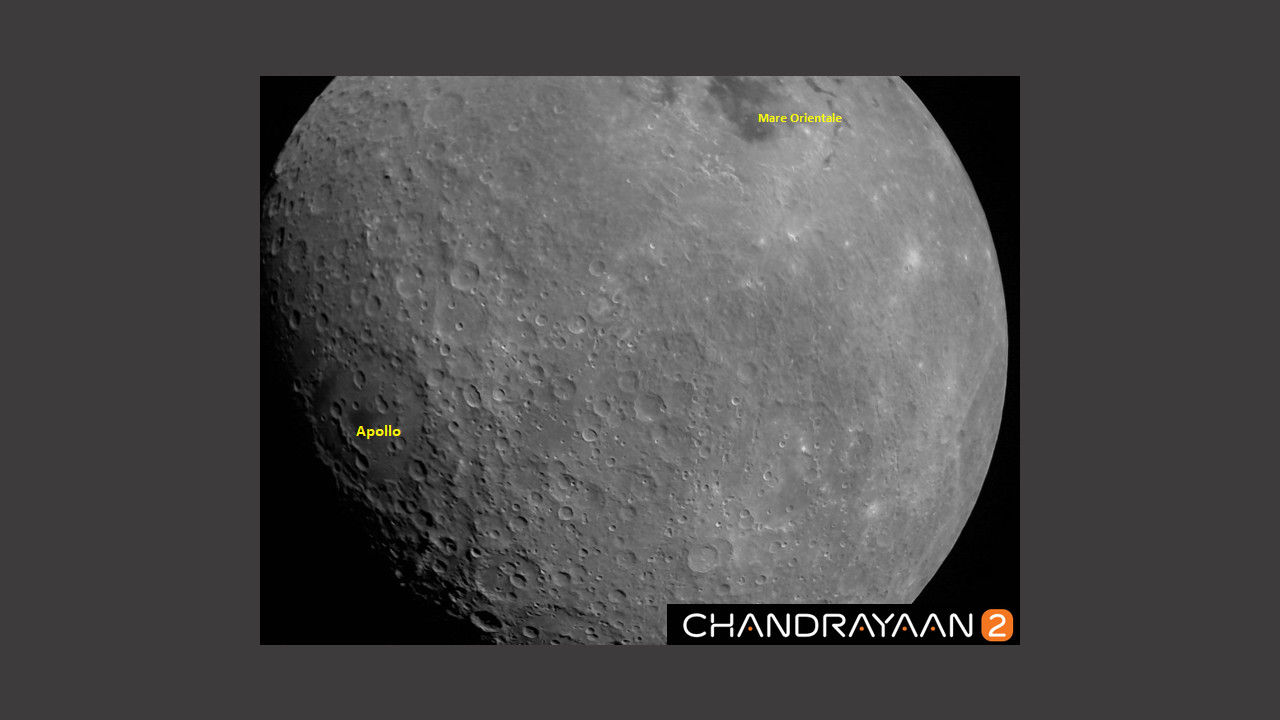 The picture was taken at a height of about 2650 km from the Lunar surface.

Chandrayaan 2 has already entered lunar orbit, and ISRO has already performed the second lunar-bound orbit maneuver as well. The orbit achieved is 118 km x 4,412 km, which means that the spacecraft has been injected into an elliptical orbit which is 118 km away from the Moon’s surface at its nearest point and 4,412 km at its furthest. During its journey to the lunar surface, the spacecraft has sent an image of the Moon, showing two significant landmarks. ISRO shared an image on Twitter noting that it was taken at a height of about 2650 km from the Lunar surface.

In the image, it highlighted the Mare Orientale basin and Apollo crater landmarks. For those who don’t know, the Apollo crater is a 538 km-wide crater named after NASA's Apollo moon missions. It is located on the moon's southern hemisphere. NASA says that there are several smaller craters inside the Apollo crater. The Mare Orientale basin is said to be over 3 billion years old and about 950 km wide. It is shaped like a bullseye, it was formed after an impact from what is believed to be an asteroid.

Take a look at the first Moon image captured by #Chandrayaan2 #VikramLander taken at a height of about 2650 km from Lunar surface on August 21, 2019.

Mare Orientale basin and Apollo craters are identified in the picture.#ISRO pic.twitter.com/ZEoLnSlATQ

The Indian space agency will perform the next orbit maneuver on August 28 between 0530 - 0630 hrs IST that will bring the spacecraft, which is carrying the Vikram lander and Pragyaan rover, closer to the Moon. In the next major phase, the Vikram lander will separate from the orbiting spacecraft to begin its five-day descent to the lunar surface. On September 4, the lander will reduce its orbit to 97 km x 35 km and all the systems will be self-checked for the subsequent three days.

On September 7 at 1:40 am, ISRO scientists will try to perform a ‘soft landing’ of the lander on the lunar surface. The lander will start capturing images of the Moon with its onboard camera and compare it with the images that has been fed into the systems from Earth. This will be done to ascertain the exact landing spot. After 15 minutes of a powered descent, at 1:55 am, Vikram will land on the Moon. Two hours after landing, that is at around 3:55 am, Vikram will open its gates for the Pragyaan rover to deploy its solar panels to power the systems onboard the rover.