ISRO will now dismantle the rocket to get to the root of the problem.

The budget of the mission is about $124 million, which is significantly less than Avengers Endgame’s budget of $356 million.

It was very unfortunate that the launch of India's second mission to the moon, Chandrayaan 2, was called off (for today) just before the launch. A GSLV Mark III rocket was to take off at 02:51 am on Monday from Sriharikota, Andhra Pradesh, but the launch was aborted because the rocket was not functioning according to laid down parameters. Amid this gloomy development, there is a silver lining that will eventually give Indians a moment of pride when the Indian space agency launches the mission at a later date.

According to a report, Indian Space Research Organisation (ISRO) dubbed the detection of the anomaly as ‘lucky’. “The rocket functioning was not according to laid down parameters... we are extremely lucky to detect the anomaly just before the launch, we are in control, the rocket and satellite are safe. We will have to dismantle the rocket to get to the root of the problem… we have window till month end to launch the mission,” The Hindustan Times quoted an ISRO source as saying. 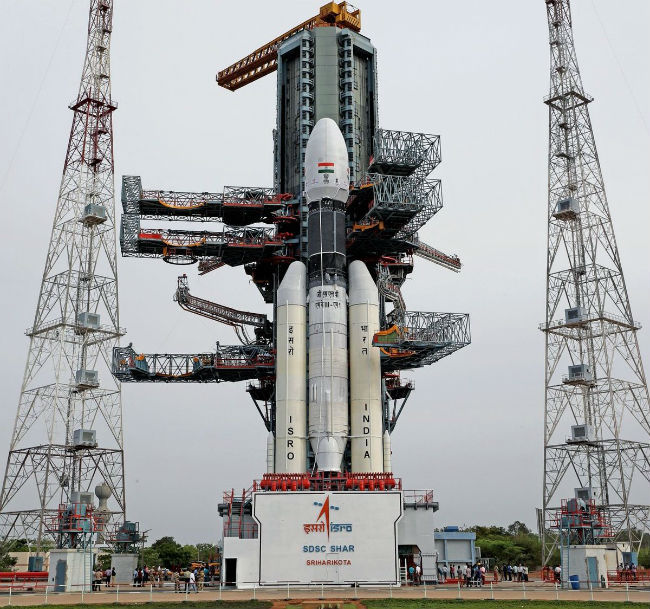 On its Twitter handle, ISRO posted, “A technical snag was observed in launch vehicle system at 1 hour before the launch. As a measure of abundant precaution, #Chandrayaan2 launch has been called off for today. Revised launch date will be announced later.” Had India succeed at a soft-landing on the moon's surface, it would have become the fourth country in the world to do so. Till now, only the US, Russia, and China have achieved this feat. Israel, which tried earlier this year, failed at their attempt.

A technical snag was observed in launch vehicle system at 1 hour before the launch. As a measure of abundant precaution, #Chandrayaan2 launch has been called off for today. Revised launch date will be announced later.

There were four suitable window periods for the launch in the month of July: July 15, 16, 29 and 30. The July 16 launch is likely called off and we have to wait for further announcements to get a revised date of the launch. Chandrayaan 2 was carrying Vikram, a 1.4 tonne lander, which houses Pragyan, a 27Kg Rover, to a plain between two craters at the moon's South Pole. The rocket GSLV Mark III, known also as “Baahubali” is a 640 tonne rocket. This is its third launch. It is also India's heaviest launcher.

Apart from this, several media outlets also covered the launch extensively. The Chandrayaan 2 is incredibly low budget in comparison to other missions to the moon. The US had spent $25 billion on the Apollo missions which started in 1961, that is over $100 billion today. Chandrayaan 2's total budget doesn’t not even exceed half a billion. On a lighter note, the whole Chandrayaan 2 mission budget costs less than half of the budget of the “Avengers Endgame” movie.

“The total cost of the Chandrayaan-2 mission is about $124 million, which includes a $31 million price tag for the launch and $93 million for the satellite. The cost is less than half of the budget of Hollywood blockbuster ‘Avengers Endgame’, which had an estimated budget of $356 million," Sputnik News had said. Cost-effective missions could mean that India and ISRO would be a preferred partner in such space deals.