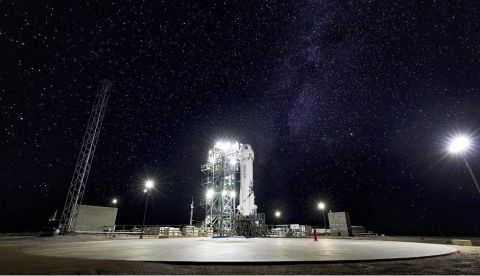 This will be Blue Origin’s third attempt to launch its reusable rocket into space.

Do you remember Blue Origin’s test rocket, New Shephard NS-10—the one that was originally scheduled to be launched on December 18 last year but was cancelled because of a “ground infrastructure issue”? Blue Origin says it has fixed everything now and has set a launch date of January 21 for the rocket. Come Monday afternoon (15:00 hours UTC), the privately owned space agency’s tenth New Shephard rocket will take off from the Corn Ranch spaceport, Van Horn, Texas.

This isn’t the first time the New Shephard NS-10 is facing a delayed launch. It was originally supposed to lift off on December 18, 2018 but was pushed to December 21, following a “ground infrastructure issue”. Eventually, when the day came, Blue Origin changed the target to “early 2019”, citing “additional systems need to be addressed” as the reason for the extended delay. It appears the private space agency is finally prepared to launch its rocket.

New Shephard is a vertical-takeoff, vertical-landing (VTVL) reusable crewed rocket designed for suborbital space tourism by Blue Origin. Its name is a reference to Alan Shephard, the first American astronaut to enter space. The propulsion module uses a Blue Origin BE-3 bipropellant rocket engine that burns liquid hydrogen and liquid oxygen. Though the New Shephard NS-10 mission is uncrewed (like the agency’s previous missions), a crewed mission is expected to take place later this year.

The next launch attempt for #NewShepard #NS10 mission will be Jan 21. We’ve fixed our ground infrastructure issue and both the vehicle and weather look good. Stay tuned for launch timing. Live webcast will be on https://t.co/WAB1Oy2KuL #GradatimFerociter https://t.co/6pusPUJd8v pic.twitter.com/dSTGebImjr