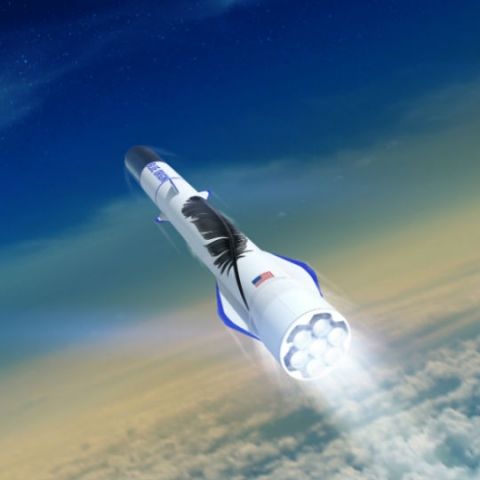 While Elon Musk-founded SpaceX is hitting all the headlines on future space travel, Amazon chief Jeff Bezos-owned Blue Origin is catching up fast, aiming to sell tickets for commercial flights to space next year.

Both SpaceX and Blue Origin are in the race to develop reusable rockets and are part of NASA's sub-orbital reusable launch vehicle flight contract.

"We need to dramatically cut down the cost to send humans in space so that we can expand humanity in our solar system. To begin this journey, we plan to sell tickets for commercial flights from next year," Rob Meyerson, Senior Vice President at Blue Origin, told the gathering at the AWS public sector summit here.

"Setting up colonies on the Moon and other planets is our primary target and we will need large payloads for surface landing. We are building the appropriate technology for that," Meyerson informed.

The statement is in line with US President Donald Trump's directive to put NASA on a path to lead the return of Americans to the Moon.

Meanwhile, SpaceX has postponed its plans to send space tourists this year to circle the Moon, owing to technical and production challenges.

Another space junkie and Virgin Galactic founder Sir Richard Branson in May said he is training to become an astronaut and will be one of the first space tourists "within months".

In Blue Origin's kitty is "New Shepard" -- a fully reusable vertical takeoff, vertical landing (VTVL) space vehicle, consisting of a pressurised capsule atop a booster that can be reused for at least 25 times.

Named after the first American in space, Alan Shepard, it can carry six astronauts to spend approximately three minutes in a high-quality, microgravity environment at an apogee of over 100 km.

April 30 marked the company's first test-flight of "New Shepard" in 2018 and second flight of the New Shepard 2.0 spacecraft.

Blue Origin launched "New Shepard" to a target altitude of about 107 km, slightly higher than the typical target of about 100 km. It was Blue Origin's eighth spaceflight since the company began flight testing "New Shepard" vehicles.

"Right now, we are living in a world where we need to throw away rockets within a year to ocean floors and millions of dollars go down the drain. With 'New Shepard', we can reuse the vehicle multiple times to significantly lower the travel cost," Meyerson announced.

"The sub-orbital space tours will make a good market for us and our customers are very excited. Once we become the most-skilled reusable rocket company in the low-orbit, we can plan to go further, deeper into the space," the Blue Origin executive noted.

The company is currently hiring principal technologists and talent in machine learning and data learning who can help the company make a long and viable space road-map.

3D printing or Additive Manufacturing (AM) is crucial for the development of new materials and the company has deployed the technology for rocket propulsion and cryogenic systems.

"AWS is the key enabler for us. We are using high-performance computing from AWS for the entire product life cycle, R&D, data storage and processing, predictive analytics and system-level anatomy to make sense of the massive data-sets that we have," Meyerson explained.

The company is now working on a larger rocket called "New Glenn" that could directly compete with SpaceX for commercial launch contracts, which is expected to be ready by 2020. John Glenn was the first American to orbit the Earth.

The BE-3 is the first new liquid hydrogen-fueled rocket engine to be developed for production in the US in over a decade. It's been designed to withstand the extremely low temperatures of liquid hydrogen.

"The BE-4 is our fourth-generation liquid rocket engine, made to take us into orbital space and beyond. Using the latest design and manufacturing techniques, it's made for both commercial and government missions," the company said.

The BE-4 is currently under development and will fly on United Launch Alliance's Vulcan rocket in 2019.

"Space travel is a marathon not a sprint. We are on the right track to write another chapter in the history of space travel," Meyerson said.