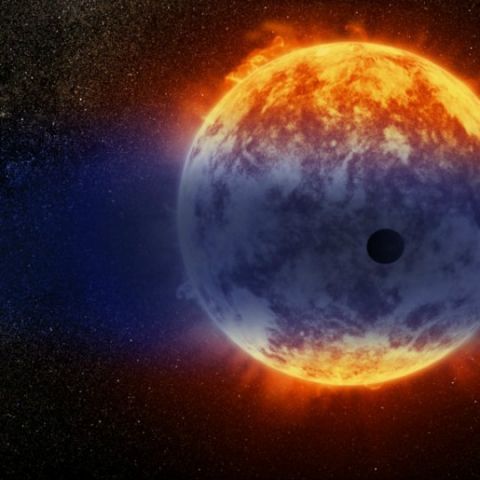 A Neptune-sized exoplanet named GJ 3470b is evaporating at a rate 100 times faster than a previously discovered exoplanet of similar size.

Until now, astronomers have observed that exoplanets primarily come in two formats: hot Jupiter-sized planets and hot super-Earths, which are planets having no more than 1.5 times Earth’s diameter. But there are also the rarer and more interesting ‘hot Neptunes’, whose atmospheres are hotter than 1,700 Fahrenheit. Only a few hot Neptunes have been discovered so far. A recently discovered hot Neptune, GJ 3470b, has been spotted evaporating at a rate 100 times faster than a previously discovered hot Neptune of similar size, GJ 436b.

The findings of the quickly evaporating GJ 3470b were published in the Journal of Astronomy & Astrophysics last week. “This is the smoking gun that planets can lose a significant fraction of their entire mass. GJ 3470b is losing more of its mass than any other planet we seen so far; in only a few billion years from now, half of the planet may be gone,” commented David Sing, an eminent professor at Johns Hopkins University and an author of the study.

The study, according to Phys.org, is part of the PanCET programme (Panchromatic Comparative Exoplanet Treasury), which is led by Sing. It is aimed at measuring the atmospheres of 20 exoplanets in ultraviolet, optical, and infrared light while they orbit their stars. PanCET is the largest exoplanet observation programme to be carried out using NASA’s Hubble Space Telescope.

Astronomers are particularly curious to know how these exoplanets lose their mass through evaporation. They theorise that these hot Neptunes lose their atmospheres by orbiting too close to their stars and eventually become smaller planets than Jupiter-sized exoplanets. In this particular study, astronomers observed that GJ 3470b lost mass significantly more quickly than the previously discovered GJ 436b because of its lower density and exposure to a stronger radiation blast from its hot star. Sing’s team supposes that GJ 3470b may already have lost up to 35 percent of its total mass and that in a few billion years will lose all of its gas, leaving behind a single rocky core.