Astronauts make safe but turbulent return to Earth from ISS 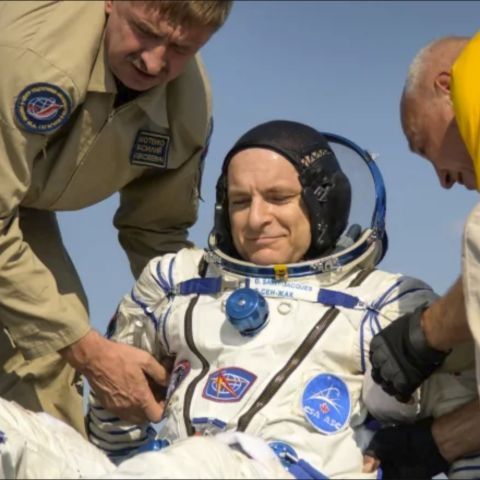 The crew spent 204 days in space before making a turbulent return to the planet.

Saint-Jacques sets record for the longest single spaceflight by a Canadian.

Three space explorers namely NASA astronaut Anne McClain, cosmonaut Oleg Kononenko of Roscosmos, and Canadian astronaut David Saint-Jacques returned to Earth safely earlier today after spending 204 days aboard the International Space Station (ISS). NASA Administrator Jim Bridenstine confirmed the landing of the crew in the southeast of the town of Zhezqazghan in Kazakhstan at 10:47 PM EDT (8:17 AM IST). Though the crew landed safely, the ride back to Earth appears to have been understandably turbulent.

According to a news report by CBC, the capsule that left the space station the previous evening landed on Earth upright, as if it had been burnt up by the heat during re-entry. David Saint-Jacques was reported to have feared the worst during re-entry. “David smiled but it was a forced one, because he was extremely nauseous,” said CBC reported Chris Brown, who was present at the landing site in Kazakhstan to greet the astronauts.

Minutes before the Canadian astronaut was whisked away in a helicopter to the local airport, Saint-Jacques reportedly said to CBC News, “Gravity isn't my friend. I have to learn to walk again.” The first thing that struck the astronaut after his return from space was reportedly the smell of grass. Having spent 204 days in space, Saint-Jacques set a record for the longest single spaceflight by a Canadian. Veteran cosmonaut Kononenko, on the other hand, was “happy to see any kind of weather.”

The three astronauts went into space in early December last year, shortly after the Soyuz launch failure in which NASA astronaut Nick Hague and Russian cosmonaut Aleksey Ovchinin were forced to abort the ascent to the ISS and land some 500 kilometres north-east of Baikonur. The launch failure was the result of a malfunction in the booster separation process. Nick Hague, who was flying to space for the first time, later returned to space as part of ISS Expedition 59/60.

Welcome home @AstroAnnimal, @Astro_DavidS and Oleg Kononenko! The @Space_Station crew has returned home safely after 204 days in space & 3,264 orbits of Earth. Everyone at @NASA is grateful for your hard work! pic.twitter.com/BQMK9WxH8U