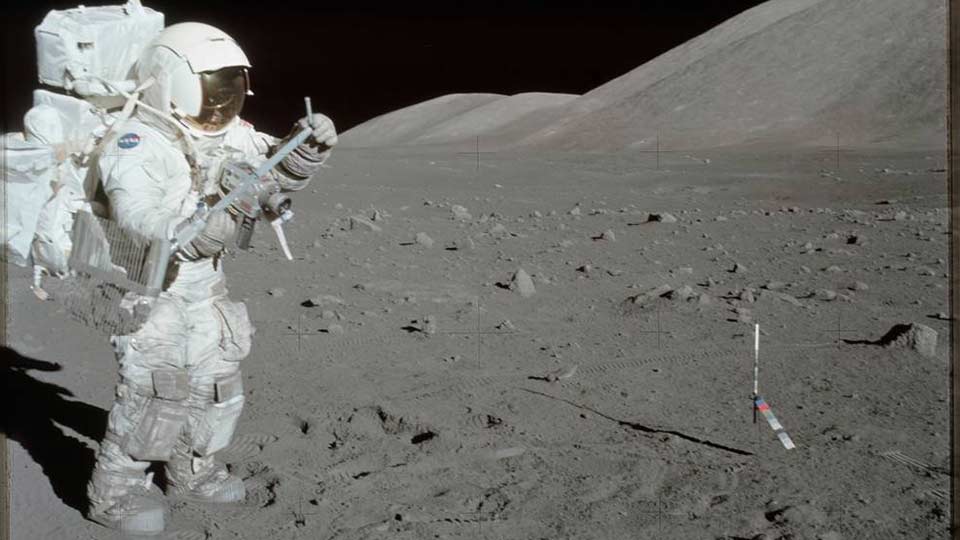 On July 20, 1969, the Eagle landed on the Moon, carrying two astronauts on board. One of the primary objectives of the mission was to return samples of Moon rocks to Earth. The two astronauts, Buzz Aldrin and Neil Armstrong, collected samples of lunar rock and soil, using hammers, tongs and scoops. The subsequent Apollo missions 15, 16 and 17 were also used to collect samples. In all, the missions collected over 380 kg of lunar samples, with nearly 90 kg from the Apollo 17 mission alone.
Plaques containing Moon rocks were given away to countries around the world as goodwill gestures from the then US President, Richard Nixon. India received a commemorative Moon sample plaque as well, which is at the Parliament Museum in New Delhi. Most of the samples, were however used for science.
The samples were studied and led to a better understanding of the Moon. For example, before the Apollo missions, scientists really did not know how old the Moon was. Dating the rocks and soil allowed researchers to date the Moon as 4.5 billion years ago. The current theory is that the Moon was formed from the material ejected after a body roughly the size of Mars, collided with the Earth. Researchers also figured out that the Moon had gone through a period of global melting, and that some of the material on the Moon was older than the Earth itself. Scientists also discovered a whole new set of minerals that do not exist on Earth. These understandings were possible because of the lunar samples returned from the Apollo missions.
The samples returned from the Moon also serve as unequivocal proof that the Moon missions in fact took place, and are the best evidence to debunk conspiracy theories. The process required to artificially manufacture the lunar samples is more expensive than the actual missions. Professor Trevor Ireland from ANU explains, “Any attempt to make Moon rocks in a laboratory would be a monumental failure and likely cost more money than it took NASA to get to the Moon and back. The lunar soil is like nothing we have seen before on Earth. It is the result of eons of bombardment on the surface of the Moon. The rocks have compositions that are unique to the Moon.” The recovered samples continued to be studied by researchers around the world. “That six of the missions landed on the Moon, and brought samples back to Earth, is one of the greatest achievements in history. To this day, we continue to analyse the Apollo lunar rocks and they still have surprises for us,” Ireland says.
Not all of these returned samples were studied immediately. NASA stored away some of the samples, in vacuum sealed containers. For fifty years, these samples have never been exposed to the atmosphere of the Earth. The idea was to keep the samples stored in an isolated environment, till there were more advanced technologies to better study them. Lori Glaze, acting director of NASA’s Planetary Science Division explains, “Returned samples are an investment in the future. These samples were deliberately saved so we can take advantage of today’s more advanced and sophisticated technology to answer questions we didn’t know we needed to ask”. NASA is now releasing some of these stored samples from the Apollo 17 mission to educational and research institutions, where scientists can better study them. As far as the researchers are concerned, it is as if there has been a new sample return mission to the Moon. The science based on the Apollo mission continues, even after half a century. There are still questions that need to be answered, for example researchers do not know if the Moon is still geologically active.
Each of the nine teams will study different aspects of the geology of the Moon, and understand how it evolved over time. Various research organisations associated with NASA will study how water is trapped on the Moon despite it having no atmosphere for protection, the process of space weathering, or how exposure to space affects the geology of the Moon, how prebiotic molecules such as amino acids are preserved within the lunar soil, and estimate the age of the samples by studying the amount of noble gases in them. Researchers from the University of California Berkeley will study how the lunar surface was affected by meteorite impacts. University of Arizona researchers will be studying minerals as well as water retention. Researchers from the University of New Mexico will study a special sample retrieved from what is known as a cold trap. The region from which the sample was collected from was cold enough for water to remain in a frozen state. This will be the first time that such a sample has been made available for study. Researchers from the Mount Holyoke College will study ancient volcanic activity on the Moon, with a focus on tiny glass beads associated with lunar volcanism.
While NASA has announced that these samples will be made available to the research institutions, the scientists will not get their hands on them till 2020. The NASA scientists will have to first process the samples, and prepare them for the studies. During this process, the considerations are that all the teams will be able to perform the studies that they intend to, and that the samples are not contaminated by exposure.