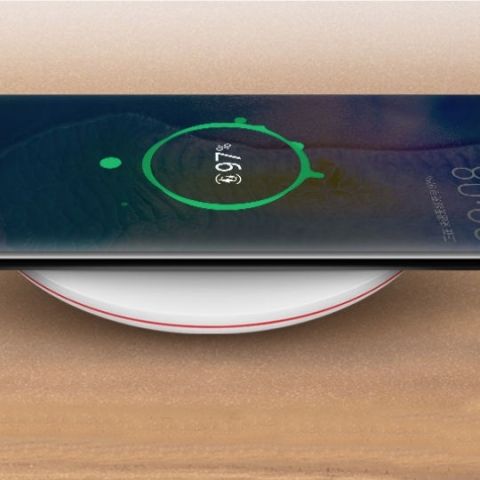 Earlier this month, Huawei Consumer Business Group, India announced that it will bring one of its latest flagship devices, the Huawei Mate 20 Pro, to the country. In a latest press note, the company has announced that it is also set to bring its wireless charger to the Indian market alongside the launch of Mate 20 Pro next month. Huawei says that it has developed a 15W (Max) quick wireless charger that delivers speed that matches wired charging.

According to the company, with a 10-minute 15W wireless charging session on the Huawei Mate 20 Pro, the charger fills the battery to the 12 percent mark and if a user charges a phone for 30 minutes, the battery is charged to 31 percent. The charger is developed according to the Qi standard for universal compatibility and it is said to adjust output power automatically to safely charge different hardware like smartphones, earphones and smartwatches which support wireless charging tech.

Huawei says that the charger includes Comprehensive Safety Protection features through which it is capable of automatically turning off when it detect metallic objects likes keys and coins. The Huawei wireless charger also has a built-in chip that can adjusts the output power automatically according to the ambient temperature and real-time battery percentage.

The Huawei Mate 20 Pro features a 6.39-inch 2K+ Curved OLED HDR display with a 19.5:9 display aspect ratio. It has a a notch that houses the front camera and sensors for face recognition. The smartphone is powered by the company’s latest 7nm Kirin 980 processor that uses Cortex-A76 based CPU. The phone supports 40W SuperCharge technology, which the company claims can charge 70 percent of the device’s 4200mAh battery in 30 minutes.

When it comes to the camera, the Huawei Mate 20 Pro comes equipped with a triple 40MP + 20MP + 8MP sensor configuration, in which the sensors are placed in a square setup. The first sensor is paired with a 27mm wide lens with f/1.8 aperture, while the 12 MP sensor gets a 16mm ultra-wide lens with f/2.2 aperture. The 8MP sensor is paired with a 3X 80mm telephoto lens with f/2.4 aperture. The device’s camera supports Artificial Image Stabilisation (AIS), along with varying focal range from 16mm with ultra wide angle, 80 mm with 3x optical zoom, 135mm with 5x Hybrid zoom to 270 mm with 10x digital zoom. On the front, the smartphone comes equipped with a 24MP RGB sensor inside the notch.

The phone sports dual speakers without any speaker grille and this is done by routing audio through the Type-C port on the bottom. It runs on MIUI 9, which is based on Android 9.0 Pie. The smartphone was launched in Emerald Green, Midnight Blue, Pink Gold, Twilight and Black colours in only one 6GB RAM and 128GB storage variant. As far as the price is concerned, the Mate 20 Pro is priced at 1049 Euros (approx Rs 88,000) in Europe. The phone will be an Amazon Exclusive as the online retailer has hosted a dedicated webpage for it with the ‘Notify Me’ button.