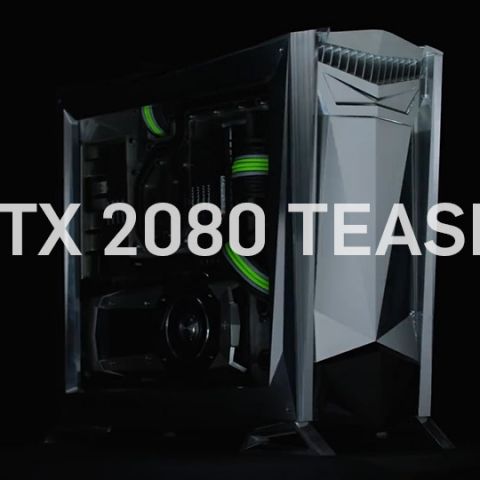 NVIDIA released a new video teasing the GeForce GTX 2080 right after Jensen Huang’s keynote presentation at SIGGRAPH 2018 where he unveiled the Turing based NVIDIA Quadro RTX 8000, 6000 and 5000. The hype is pretty much real as witnessed by the numerous outlets which have begun dissecting the video for clues as to what the next generation of GeForce graphics cards from NVIDIA have in store, and the video is laden with hints pointing to the Turing based cards. The sheer number of hints point to the next generation of graphics cards being part of the 20-series. So we might just see the NVIDIA GeForce GTX 2080 and GTX 2070 being launched at the #BeForTheGame event in Cologne, Germany on the 20th of August 2018.

The video in question drops a lot of hints regarding the launch of the new graphics cards. Most of these hints are in the form of usernames of Discord participants and their chat seen throughout the video. The following names can be seen in the video:
Erycina
RoyTeX
Xtreme
Ray
Zenith20
AlanaT
Luzia
Not_11
Mac-20
Eight-Tee

If we are to speculate, then Not_11 literally reads that the new generation of graphics cards won’t be GTX 11-series. Then we have RoyTeX with the letters RTX in caps. RTX also happens to be the new series of Quadro graphics cards that were announced earlier today. We then see the names Xtreme and Ray alluding to the same Ray Tracing features that were shown at the Quadro unveiling. Zenith20 and Mac-20 allude to 20-series being the name for the upcoming lineup. AlanaT could very well be a nod to Alan Turing, the architecture that the new GTX 2080 is based on is his namesake.

Then we have the names Not_11, Mac-20 and Eight-Tee appearing in the exact same sequence. It appears, NVIDIA is not trying to be subtle at all.

Then there is a chat which point towards Cologne, Germany where the #BeForTheGame event is scheduled to take place. The co-ordinates “50.968495,7.014026” are given out by user AlanaT which is near the centre of Cologne.

Suffice to say, that NVIDIA isn’t being coy about the GTX 2080 unveiling at Gamescom 2018.