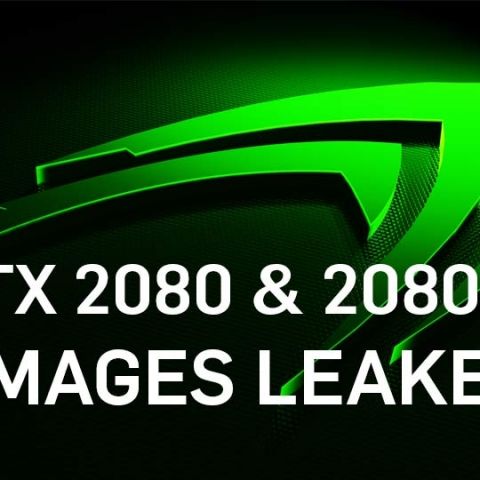 The GAMING X TRIO variant from MSI is a non-reference RTX 2080 graphics card with a Triple Fan cooler and 8 GB of GDDR6 memory. As for the GPU architecture, these new cards will have GPUs based off NVIDIA’s new Turing microarchitecture. While it might only have the same amount of memory as the GTX 1080, it should be noted that the new GDDR6 memory is way faster and thus, the need for more memory does not arise except for a few cases where high-resolution and settings are concerned. 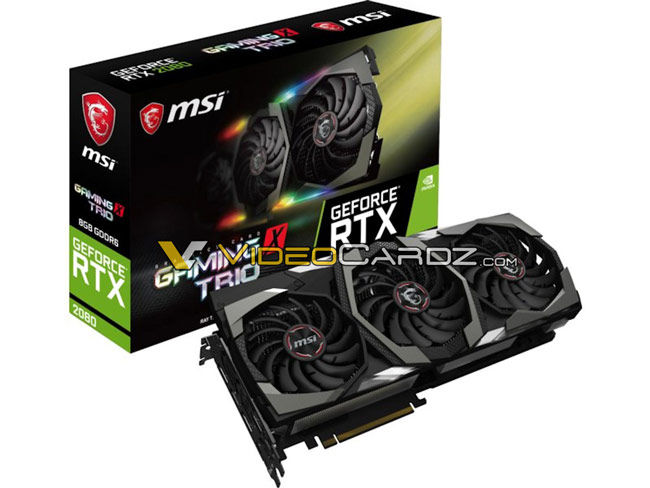 The MSI GeForce RTX 2080 GAMING X TRIO seems to feature a new shroud while retaining the same triple-fan cooler setup. The RGB LEDs have now been incorporated into clear plastic windows cut into the top and bottom sides of the shroud. As for the cooler, the two fans on the side are smaller than the one in the centre that sits atop the GPU. 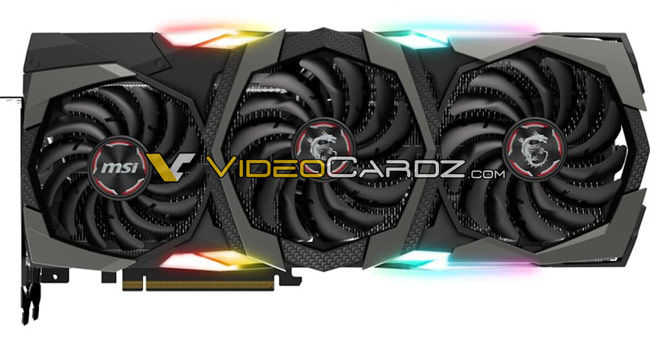 Both the images of the MSI GeForce RTX 2080 GAMING X TRIO do not give us any indication about the SLI finger that has supposedly been replaced by NVLink. Nor do we get an idea about the power requirements. The typography on the box-art seems suspect and this could easily be a quick photoshop job. However, there are certain aspects which make us believe that the card renders are real.

Coming to the MSI GeForce RTX 2080 Ti GAMING X TRIO, it has the exact same box-art with just the letter Ti being the only addition. However, the way it’s been written seems different from what we’ve seen NVIDIA do in the past. The GeForce, RTX, GTX and NVIDIA Logo use on the box art and packaging are all vetted by NVIDIA before brands can use them. These don’t appear to have gone through the same vetting process. 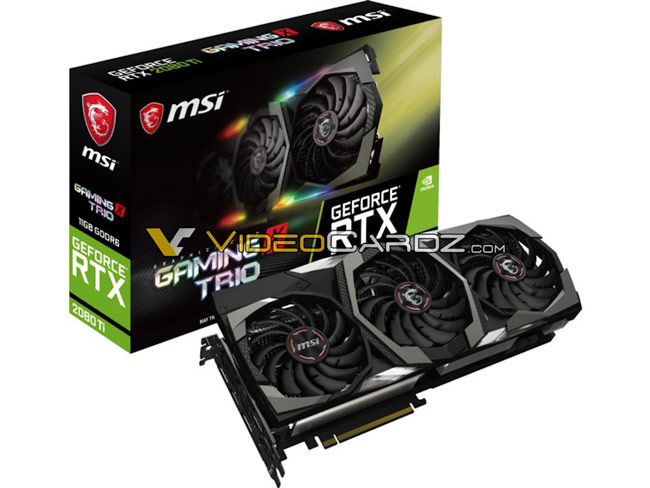 With the MSI GeForce RTX 2080 Ti GAMING X TRIO we get to see the rear side of the graphics card which appears to feature the MSI Dragon logo and has a brushed metal texture. What stands out from previous cards is the presence of the NVLink finger at the top and what appears to be two 8-pin power connectors. We have seen previous gen GTX 1080 Ti graphics cards with similar arrangements. 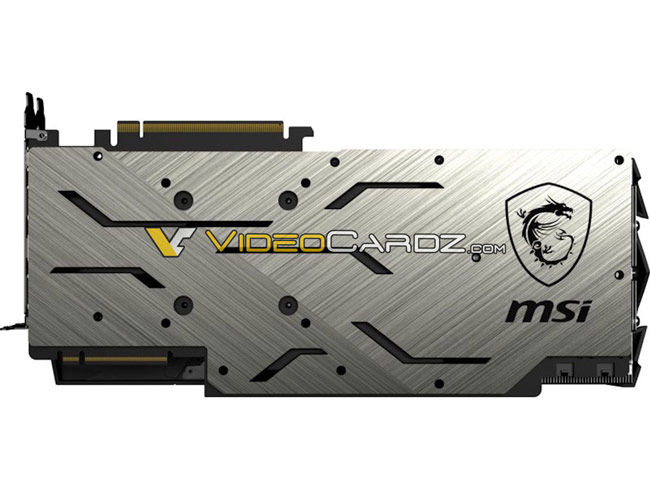 Again, the way the power connectors and NVLink finger appears in the leaked images make us suspect the images. By zooming in onto the NVLink finger we can see the use of the blur tool at equidistant steps, thus, leading us to suspect that the SLI finger image was simply cloned multiple times and then overlaid onto each other.

Is this a fake leak?

The shroud we see here hasn’t been used in the previous generation of MSI graphics cards, this leads us to believe that these might be the new MSI GeForce RTX 2080 Ti GAMING X TRIO and MSI GeForce RTX 2080 GAMING X TRIO graphics cards. However, the box-art being the same for the RTX 2080 and 2080 Ti seems very odd. Also, the photoshop being so crude and obvious makes us question these images as well. Moreover, NVIDIA always has an 8-10 month gap between the launches of the xx80 and xx80 Ti variants. Seeing the Ti variant at around the same time as the non-Ti variant is very suspicious. Let’s take this one with a pinch of salt