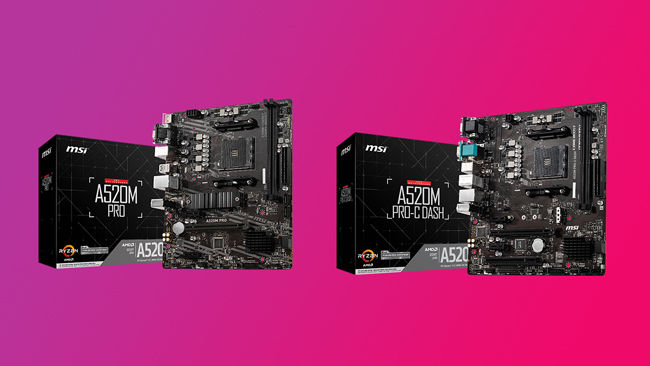 MSI is launching two lineups using the AMD A520 motherboards today, the MAG series for Gamers and the PRO series for businesses and enterprises that require smart management features such as DASH LAN. These new A520 motherboards will feature MSI DDR4 Boost which allows RAM to be overclocked up to 4600 MHz and these boards reportedly utilise 2 oz thickened copper PCB for better durability and stability.

MAG A520M VECTOR WIFI is the latest motherboard from the MAG Series. This board uses MSI's Extended Heatsink Design which includes the M.2 Shield Frozr for M.2 SSDs. Together with Turbo M.2 it allows for SSDs to attain peak performance without facing thermal throttling. It supports Wi-Fi AC 3168 and Gigabit LAN for networking and Onboard DisplayPort and HDMI for AMD Ryzen APUs.

PRO Series aims to provide users with a smarter working environment. All MSI A520 PRO motherboards support Turbo M.2 Gen3 x4 and 4K HMDI display. There are 3 Micro-ATX motherboards – A520M PRO, A520M -A PRO, and A520M PRO-C DASH. The A520M PRO-C DASH is designed for a business and corporate environment, with the featured COM port, Printer port, and DASH LAN fulfilling all the workplace’s needs.