The new Ampere cards possess more performance than their predecessors as the leaks suggest from Videocardz, the performance of the NVIDIA RTX 3060Ti is either on par or better than the Turning architecture based RTX 2080 Super. As per the leaked slide for the RTX 3060Ti, the tests were carried out on an Intel Core i9-10900K CPU at 2560 x 1440 resolution, no other information was provided about RAM or motherboard used.

Given the numbers and performance improvements in the new cards, they could be crushing the market of budget gamers as the 3060Ti is rumored to be priced at $399 (roughly Rs 30,000 directly converted), while the RTX 2080 Super currently costs around $699 (roughly Rs 52,000 directly converted). While the speculated launch of the new card is just around the corner on December 2 (yet to be announced), we know from the previous launches of the RTX 3000 series cards that NVIDIA has been making significant strides with the Ampere architecture. 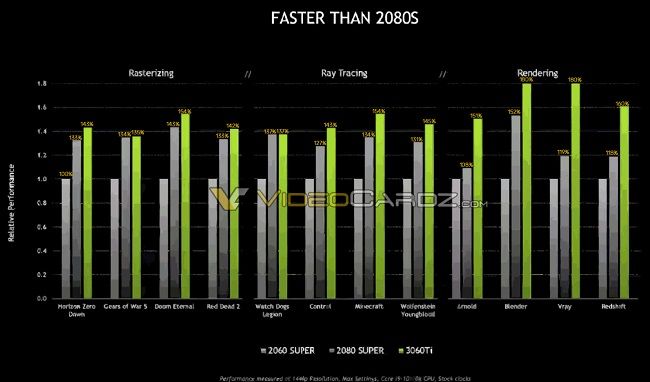 In gaming benchmarks, the non-ray tracing (rasterized) scores show that RTX 3060Ti is about 10 percent faster than RTX 2080 Super in Red Dead Redemption 2, Doom Eternal, and Horizon Zero Dawn while performing similarly in Gears of War 5. In ray-tracing enabled games, it shows an improvement of about 20-40 percent in games such as Wolfenstein Youngblood and Minecraft RTX. The cards show promising improvements in rendering applications such as Blender and Arnold with improvements almost up to 50 percent.

Given the current shortages of new generation cards from NVIDIA, it is likely that this card would be the go-to choice for gamers in the entry-level segment given the $399 price. Interested gamers would have to either pre-book the card or keep on checking the NVIDIA inventory for the availability of the new cards.