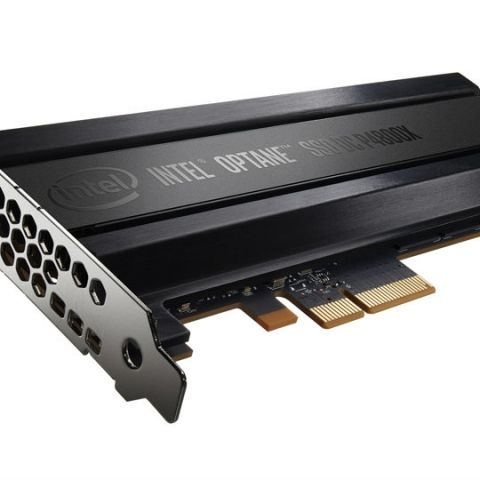 Just last month, Intel Unveiled the new 3D XPoint based Optane SSD for the consumer and now the SSD's are ready for shipping. Initially only the 375GB DC P4800X variant of the SSD will be available and will set you back about $1520 (Rs. 1,00,000 approximately). The optane drive will be available in 750GB and 1.5TB variants, but those will come later this year. Intel claims this new SSD technology will offer 10 times more write speed than current gen storage solutions and will more reliable as well.

Although to use the said SSD, one needs to have 7th gen Intel Core or a Xeon E3 v6 processor along with a HM175, QM175 or a CM238 motherboard. The motherboard is also required to have a M.2 or U.2 or a PCIe x4 slot. So, the Optane SSD is not only expensive on its own, but you will have to spend more money to run one.

The 3D XPoint technology which Intel is using here was developed in partnership with Micron technology. This is quite different from normal NAND based SSDs as instead of using cells to store data and transistors acting as gates or locators, 3D XPoint does not use these individual gates. This means the packing density is almost 4 times as that of DRAM. That being said, there are transits to address the columns and rows but these are now fewer, making the whole process efficient.