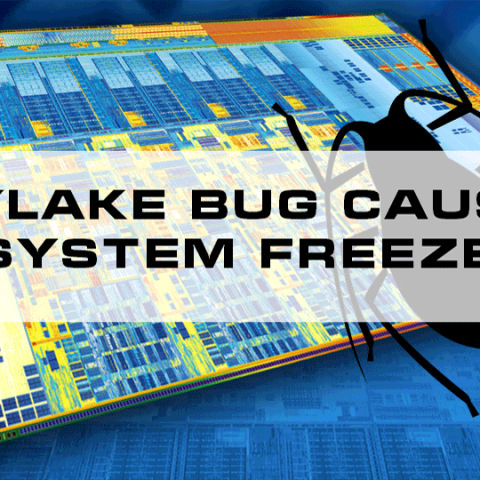 Mathematicians at the Great Internet Mersenne Prime Search (GIMPS) came across the bug while running Prime95 – an application used to calculate prime numbers – in their search to find Mersenne Prime numbers. The bug has been reproduced on multiple systems irrespective of the motherboard, operating system or the RAM modules used. The system freeze is only triggered with the said software under very specific settings.

The first incidence of bug was reported by the folks over at the Mersenne forum and at Hardwareluxx.de when members tried running the 768k test in Prime95 with a certain exponent (14942209) on the Intel® Core™ i7-6700K Processor which is the current flagship processor from Intel. However, the problem seems to be more widespread than just this one processor. Any Skylake processor with Hyperthreading and Advanced Vector Extensions (AVX) instruction set enabled will freeze up when Prime95 is run with the aforementioned settings.

These findings were then reported to Intel on their support forums which then proceeded to replicate the issue on their side. And later, Intel confirmed that the issue is indeed present and affects the 6th Gen Intel Core family of processors. Here’s what they had to say –
"Intel has identified an issue that potentially affects the 6th Gen Intel® Core™ family of products.  This issue only occurs under certain complex workload conditions, like those that may be encountered when running applications like Prime95.  In those cases, the processor may hang or cause unpredictable system behavior.  Intel has identified and released a fix and is working with external business partners to get the fix deployed through BIOS."

Prime95 performs multiplications using really large numbers using an algorithm called Fast Fourier Transformation. Prime95 uses one of the most efficient methods of running these calculations and when one specific length of FFT is used (768k), Skylake processors freeze up. If you wish to replicate this issue in your Skylake system then you can download the latest version of Prime95. Install and run the software, navigate to Advanced > Test in the advanced options and enter 14942209 on the box labeled ‘Exponent to test’. Then run the test. As soon as the FFT hits 768k, which could take anywhere from a few minutes to hours, your computer should freeze. Do keep an eye on your CPU temperatures as Prime95 is known to ramp up temperatures quickly and you shouldn’t run it for too long without a proper cooling setup.

The average use will hardly ever come across this bug so it isn’t a cause for concern. And you should keep checking your motherboard’s software download page for the BIOS update which promises to fix the bug. Meanwhile, if you wish to keep tabs on the folks at Mersenne forum who are constantly fiddling with this issue then you can head over to their forum and check out this thread.