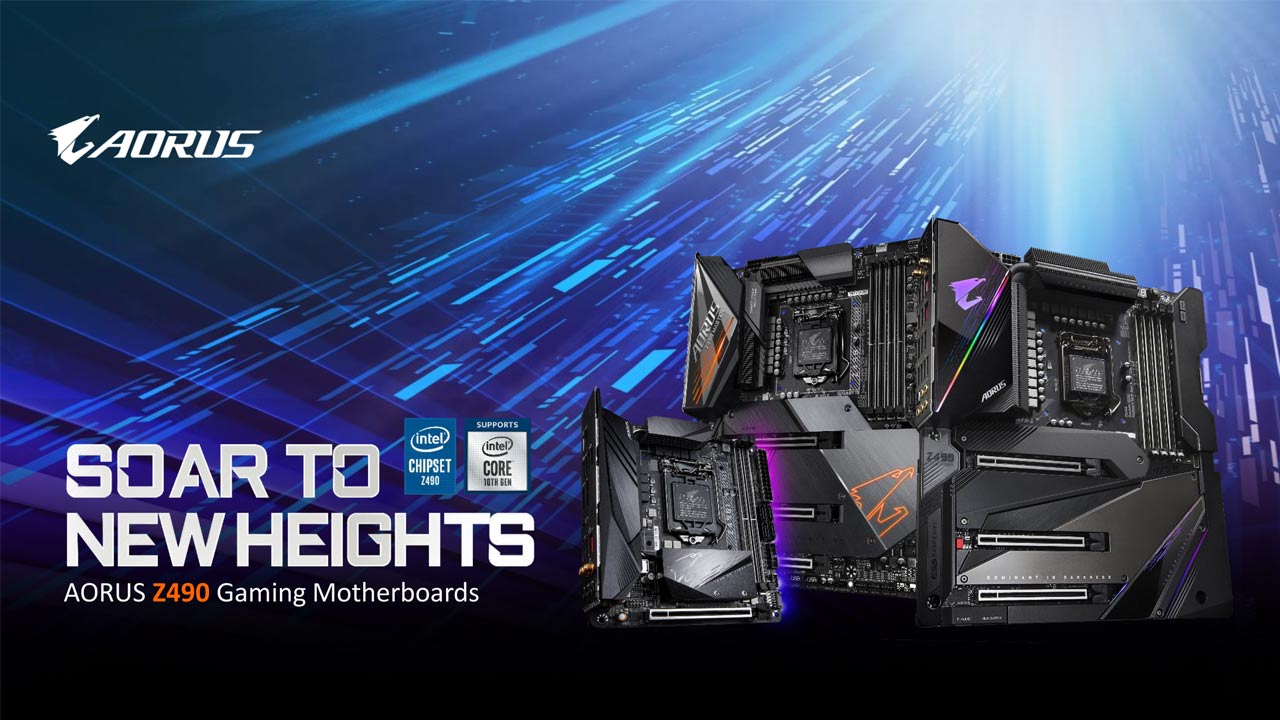 Very similar to the main talk points of the recently announced Asus Z490 and MSI 400 series motherboards, the Gigabyte boards focus on higher quality VRMs, better cooling for on-board components and as a result, better power delivery. There’s also plenty of upgrades in terms of ports and connectivity, support for higher clock speed RAM and most interestingly, PCIe 4.0 slots. It is interesting that while neither the new 10th generation processors nor does the Z490 chipset support PCIe 4.0, Gigabyte has still etched the circuits in. This could be to future proof their boards, in case Intel’s next generation of processors do end up bringing PCIe 4.0 support. Let’s take a look at all the boards Gigabyte has announced.

The Gigabyte Z490 AORUS Xtreme is the top-of-the-line board from Gigabyte in today’s announcement and it features a number of very lucrative features. Besides 16-phase VRM and Tantalum Polymer capacitors, there are extensive heatsinks all around the motherboard to keep heat to a minimum. The board comes with right-angled connectors for clean cable management. In terms of I/O, there is onboard Thunderbolt 3, 10Gbps, 2.5Gbps Ethernet ports along with Wi-Fi 6.

The AORUS Master comes with most of the features of the AORUS Xtreme but drops the Thunderbolt 3 and 10gigabit ethernet port from the feature set. The board also features 14 phase Digital VRM instead of the 16 on the AORUS Xtreme. You still get Wi-Fi 6 and Bluetooth 5. For those who need ultra-fast storage and lots of it, the AORUS Master offers three M.2 NVMe slots with Thermal Guard II, Gigabyte’s homegrown heat spreader for m.2 drives.

Taking things a notch lower and into more mainstream-gamer territory are the AORUS Pro RX and AORUS Ultra. With 12 phase power delivery, overclocking a 10th generation processor should not be an issue on these boards. The AORUS Pro RX sports dual M.2 NVMe PCIe 3.0 x4 slots while the AORUS Ultra comes with triple m.2 NMVe slots. There’s also 2.5gigabit ethernet alongside Wi-Fi 6 and Bluetooth 5 on both the boards.

Designed for the entry-level gamer building their first high-performance system, the AORUS Gaming X comes with Direct 11+1 phase power delivery, allowing the board to just enough qualify as one that can support overclocking. The VRMs are modestly cooled, so we wouldn’t expect really high overclocks from this board. The board comes with 2 m.2 NVMe slots, with one slot featuring its own heatsink while the other supporting SATA as well. This board does not come with Wi-Fi or Bluetooth but does retain the gigabit ethernet connectivity.

Out of the two boards comprising the Vision series, the Vision D is the higher end card, featuring 12 phase power delivery, three PCIe 3.0 x4 slots, 2.5-gigabit ethernet along with Wi-Fi 6 and Bluetooth. Interestingly, this board sports two Thunderbolt 3.0 ports. The board features newly designed heatsinks for the chipset, the VRM and even the m.2 slots. The board can support up to a whopping 128GB of DDR4-4800 memory.

The Vision G in comparison is more watered down, with no Thunderbolt 3 ports, but the board does support a Thunderbolt AIC. All other specs of the board remain the same, except for the fact that of the 3 m.2 NMVe slots on the board, only two come with their own heatsinks.

As of now, Gigabyte has only said that the newly announced boards will be coming to India soon, but there is no word on pricing yet.