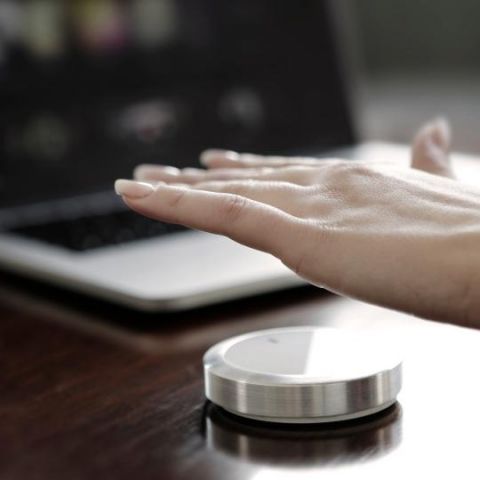 Flow is a programmable wireless controller that provides flexible shortcuts and perfect control in a fast, intuitive, precise and fun manner.

The controlled combines hand gesture recognition, haptics and touch to make shortcuts that can used to make your life simpler. The device, is made from aluminum and stainless steel with a durable polycarbonate touch surface and has a replaceable battery promising four months of charge according to its Indiegogo page. It sensors enable infrared-based hand gesture recognition, 360-degree angular positioning, capacitive touch and luminosity.

Flow offers support for more than 30 applications, including SoundCloud, Spotify, Premiere and YouTube. For Example, while listening to music on Spotify users can skip over tracks by simply making a swipe gesture over the device.Currently Flow's information points to the peripheral being used with desktops or laptops, but the company plans to add support for mobile applications as well as smart devices in the future.

Flow CEO Tobias Eichenwald says that eventually they aim to code their controller with "dozens of controls out of the box," including synchronization with Linux-based software, the Arduino and Raspberry Pi "maker" boards, popular design applications like Photoshop, and media platforms like Vimeo, YouTube, and Pandora.

"We'll start off by supporting Mac, then add support for iOS devices, Android, Linux, and Windows. We're making progress fast and we'll keep you posted along the way," the Flow team said.

The Flow Team has set up an campaign on crowd funding site Indiegogo to raise $50,000 in seed money. The team has already raised $ 16,750 on the second day of its campaign and plans to release the product by 2016.

Read: Fin: a ring that turns your palm into a touch interface