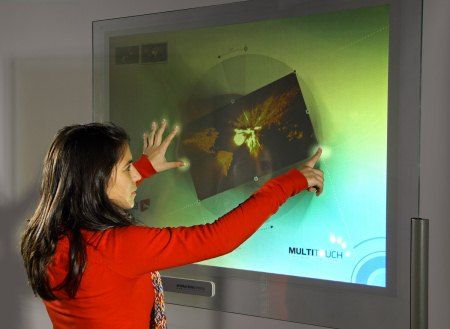 DISPLAX, a manufacturer of interactive technologies, has recently launched a new, large-format multi-touch technology that will transform any non-conductive surface into a multi-touch screen. It is expected to have competing features with Microsoft Surface; which was launched in 2008 and allows users to manipulate information using gestures.

DISPLAX Features:
• It is developed based on a transparent thin polymer film and the surface becomes interactive when applied to glass, plastic or wood
• It is hyper-sensitive, responding not only to touch but also to a user's breath and reacts to blowing, thus opening avenues for even more sophisticated technologies ahead
• The films range from 3-inches to 120-inches diagonally
• The film is about 100 microns thick and so it can slip onto any hardware
• It can be applied to flat, curved, transparent and opaque surfaces
• The films have a 98 percent transparency
• The film comes with its own firmware, a driver that connects via a USB connection, and a control panel for user calibration and settings
• Currently, it can detect up to 16 fingers on a 50-inch screen 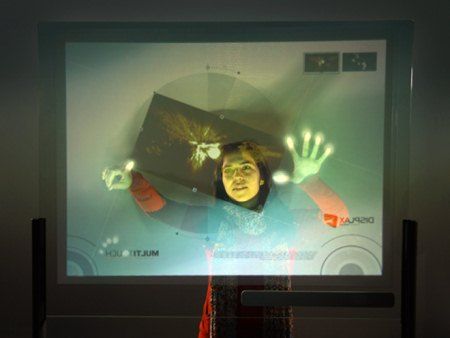 DISPLAX applications:
• As the film can be conveniently applied to standard LCD screens, it is an attractive choice for LCD manufacturers
• It will also be available for audiovisual integrators or gaming platforms to develop interactive gaming environments and audio-visual applications
• New applications such as converting a room's table into a multi-touch surface and creating interactive information screens in stores, shopping malls or public areas
• The company also expects genuine interest from industries as diverse as retail, pharmacy, telecom, real-estate and finance, etc.

The tech behind DISPLAX:
• It is based on a patent-pending projected capacitive technology
• It uses a controller that processes multiple input signals from a grid of nanowires embedded in the film attached to the enabled surface
• Each time you place your finger on the screen or blow on the surface, it receives a small electrical disturbance
• The micro-processor controller analyses this data and then decodes the location of each input on that grid to track the finger and air-flow movements

Availability and price of DISPLAX:
• The DISPLAX multi-touch technology will begin shipping in July 2010
• The prices will be very competitive and depend on size, the company says

“If DISPLAX can do this for larger displays, it will really be one of the first companies to do what we call massive multi-touch,” says Daniel Wigdor, a user experience architect for Microsoft who focuses on multi-touch and gestural computing.