The upcoming Dell PC is likely to feature two displays and will support stylus and a Surface-dial like accessory. 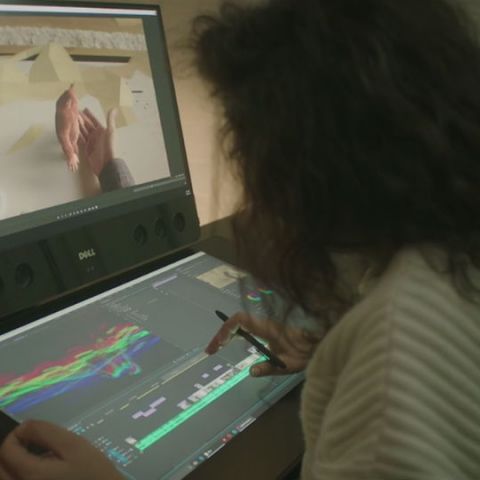 Dell teased its version of the Microsoft Surface Studio, at Adobe’s Max conference yesterday. The company did not reveal any specifications or details about the upcoming machine, but did give us a look at the design and interface of the PC. From the teaser it is quite clear that Dell is targeting this PC towards creative professionals, since it is shown supporting a stylus and a Microsoft Surface Dial-like accessory.

Going by the teaser, what makes Dell’s version of the PC different than the Studio is that in the teaser, the device doesn't seem to have a keyboard or a mouse. Instead, it features a big touchscreen display as an interface. The secondary display may double as an extension to the main display, and is likely to provide input interface for the stylus as well as the Surface-dial like accessory, Dell is making for the machine.

Envisioned in 2014, now catching the audience's eye at #adobeMAX: https://t.co/xaRg0NAYFT Join us at #CES2017 for the official announcement! pic.twitter.com/vpBHzSFhXS

As for the specifications, Dell has not revealed any details, but going by what the company envisions, it should be as powerful as the Microsoft Surface Studio. To recap, the Surface Studio, will be powered by 7th Gen Core i5 and i7 processors, and it can have up to 32GB of RAM along with up to 2TB of storage.

Dell has tweeted that the device was first envisioned in 2014 and will be announced at CES 2017. The Surface Studio will also start shipping in early 2017 and we expect more companies like HP and Lenovo to come up with PCs on the same platform for creative professionals.