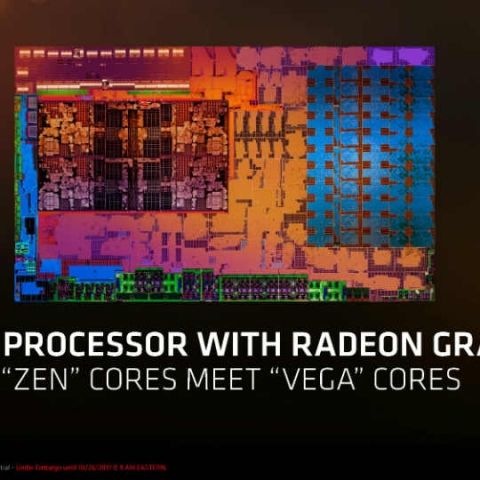 Intel was not the only one at CES announcing new processors at this year. Arch rival AMD also took the covers off its AMD Ryzen 3 Mobile APUs and released details of its 2018 roadmap.

The highlights include AMD upping the performance of its second generation Ryzen parts by moving to Globalfoundries’ 12nm (12LP) process. On the graphics side, AMD announced RX Vega Mobile GPUs which is AMD’s latest bet on discrete GPUs for ultra-thin notebooks. The best part is AMD is all set to bring Vega to 7nm, and it is likely that Ryzen will follow.

The company also revealed that it is on track with the new Zen architecture (Zen 2) based on a 7nm process as the design phase is now complete. The Zen 3 microarchitecture which will be based on 7nm+ is also mentioned to be on track.

AMD President and CEO, Dr. Lisa Su said, “We successfully accomplished the ambitious goals we set for ourselves in 2017, reestablishing AMD as a high-performance computing leader with the introduction and ramp of 10 different product families. We are building on this momentum in 2018 as we make our strongest product portfolio of the last decade even stronger with new CPUs and GPUs that bring more features and more performance to a broad set of markets.”

Then we have the AMD Ryzen desktop APUs with Radeon Vega graphics. The company revealed two new processors in the lineup today, namely the Ryzen 5 2400G and the Ryzen 3 2300G. Both of these are 4 core, 8 thread parts, but with different clock speeds. That said, both have the same cTDP of 45-65W. These new processors also support AMD’s Radeon FreeSync Technology. AMD promises better gaming performance with these processors and will be launching these in February this year.

The other big announcement made by AMD is that the second generation of AMD Ryzen desktop-class processors will be hitting the market by April 2018. These new chips will be manufactured using the 12nm process with AMD’s updated Precision Boost 2.0 Technology. The company will keep marching on in the year and in Q2 2018 will bring the AMD Ryzen Pro Mobile processors with Radeon Vega graphics. AMD will be targeting commercial, enterprise, and public sector customers with the company claiming “state-of-the-art silicon-level security”. AMD is claiming up to “22% more competitive performance” and a huge 125% added (up to) competitive graphics performance over the Intel i7-8550U with its Ryzen 7 2700U. These new processors will feature Precision Boost 2 technology and Mobile Extended Frequency Range (mXFR). AMD is suggesting that in ideal circumstances, the Ryzen 7 2700U might provide up to 13.5 hours of battery life. Techspot reports that the second generation Threadripper processors will hit the market in the second half of 2018 along with Ryzen Pro Desktop class processors. AMD also announced significant price cuts in the current CPU product lineup.