AMD introduced new sets of silicon at a press conference here at Vegas. These new processors run the gamut from APUs built for low power use in tablet PCs to multi-GHz performance CPUs and GPUs. 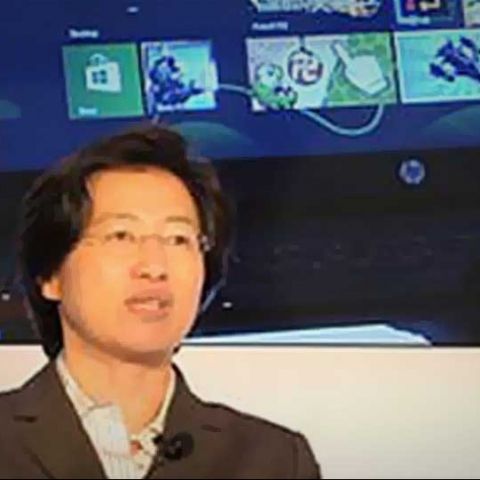 LAS VEGAS—AMD introduced new sets of silicon at a press conference here at Vegas. These new processors run the gamut from APUs built for low power use in tablet PCs to multi-GHz performance CPUs and GPUs.

AMD started by trying to coin a new term: Surround Computing, which means having computing power all around you, from smart devices embedded in glasses to room-filling visuals and sounds. In the keynote, AMD representatives touted the company's discrete graphics solutions, as well as APU solutions for laptops, desktops, and tablets.

The Radeon HD brand led off the press conference, emphasizing AMD's commitment to servicing gaming, from the traditional gaming PC to the gaming console, to the infrastructure that supports gaming. After reiterating that games like Far Cry 3, Bioshock Infinite, and the new Tomb Raider are AMD Gaming Evolved titles, AMD announced its dominance of the home gaming console market with AMD technology in three out of the four top consoles (including the new Nintendo Wii U). AMD capped the gaming section with the introduction of the AMD Radeon HD 8000M series for notebook PCs.

Next, AMD introduced its updated A4, A6, A8, and A10 APU lines and OEM partners. A representative from Asus showed the Asus U38 Ultrathin, powered by AMD A-series APUs with AMD Radeon discrete graphics as an option. The U38 Ultrathin has a 1080p screen with capacitive multi-touch. Next up was the HP Pavilion TouchSmart Sleekbook, which can be equipped with an A8 APU, 15.6-inch 10-finger touch screen.

New processors, ranging from AMD A8 and A10 performance processors (codenamed Richland) to more mainstream A4 and A6 processors (Kabini) were also discussed. Like their competitors, the new CPUs deliver users more performance as well as better battery life. Thanks to built-in Radeon technology, AMD was able to demonstrate a new Kabini processor outperforming a current Intel Core i3 processor.

The company is also going after the tablet space, with Windows-8-capable processors that slot in between ARM-style tablet processors and the low-end x86 processors originally meant for notebooks. Using gaming and HD video to tout the systems as "Performance Tablets", AMD's A4 and A6 (Temash) APUs are expected to slot into Windows 8 tablets in the near future.

Speaking of slotting in, AMD capped the presentation with the announcement that Vizio is going to use AMD APU processors in their all-in-one desktop, thin and light laptop, and new AMD Z-60 APU-based tablet PCs. All Vizio PCs announced will run Windows 8 and have touch screens.