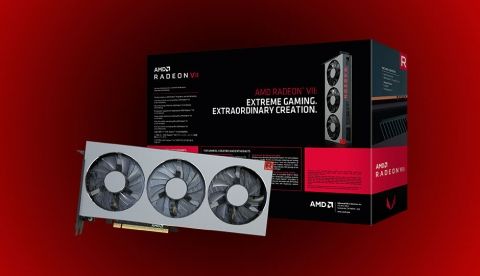 Announced at the CES 2019 AMD keynote, the AMD Radeon VII graphics card has officially been launched worldwide. The new graphics card is aimed to compete against the NVIDIA GeForce RTX 2080 but is priced $100 lesser than the RTX 2080. The Indian pricing for the AMD Radeon VII stands at Rs.54,990. This is not powered by a Navi GPU but an improved version of the Vega GPU, the Vega 20. As with most high-end graphics cards selling at the moment, even the AMD Radeon VII will be bundled with three AAA-video games which as of now include Resident Evil 2 (2019 Remastered), Devil May Cry 5 and The Division 2. We’d like to point out that two of these games have not yet been launched and will be out by the second week of March 2019.

The Radeon VII would be the third HBM2 card from AMD if you don’t count the liquid cooled variant of the Vega 64. From the specifications, the Radeon VII seems suspiciously similar to the Radeon Instinct MI50 which also has 16 GB of HBM2 memory, same number of Compute Units and is rated at the same TDP. Even the Peak Single Precision performance is slightly higher than that of the Instinct MI50, this can be attributed to the improved clock speeds of the Radeon VII.

However, the additional memory is the highlight of the Radeon VII. The Radeon VII has twice the memory buffer than the Vega 64 which begs the question – Why double the buffer now? This would be under the assumption that the Radeon VII is a new graphics card and not the Instinct MI50 in a new avatar. Most of the marketing material points to the peak usage in media creation and 4K game play. Hopefully, we'll be able to verify the same once we get the card.

The AMD Radeon VII is priced at Rs.54,990 in India. There have been a few reports citing low stocks for the new GPU in the European markets. We have no word about the same in India.