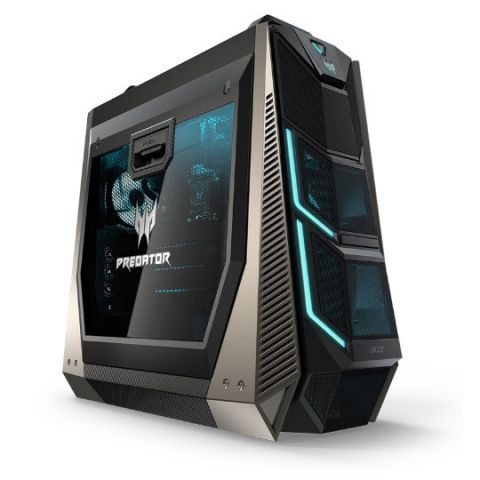 Acer has launched the Predator Orion 9000, it's most powerful desktop CPUs, in India. The full tower gaming CPU was announced last year at IFA. Just like the Predator 21X, the Orion 9000 also features top of the line hardware. The gaming PC is powered by the powerful Intel Core i9 7980XE processor, which features 18 cores and 36 threads. Graphics will be handled by the NVIDIA GeForce GTX 1080 Ti GPU with 11GB GDDR5X memory. There is a 2TB HDD 7200RPM storage onboard along with a 32GB PCIe M.2 Intel Optane memory. For RAM, you would have to suffice with a 16GB DDR4 RAM kit with 2400 MHz clock speed.

However, the best thing about this PC is that almost everything is user replaceable and upgradable. The X299 motherboard available on this rig supports 128GB RAM and has storage upgradability to up to 42TB. The Intel Core i9 sits under a custom water cooler from Cooler Master and the case itself is designed for gaming enthusiasts and professionals. There is RGB lighting everywhere on the faux carbon fiber body. The angular front fascia gives the CPU a very authoritarian stance. The side panels are see-through and have pull handles to allow easy access. You also get a couple of carrying handles on the top of the case, and the case has wheels at the rear so that it can be carried around during BYOC events.

Chandrahas Panigrahi, CMO and Consumer Business Head, Acer India, said, “We are thrilled to welcome to our gaming arsenal the iconic Predator Orion 9000 gaming desktop. The Orion 9000 is a desktop of extreme power designed especially for the demanding professional gamer with advanced cooling and game ready features to easily take on any game out there. Acer has the widest portfolio of gaming PCs in India with products catering to budding gamers to professionals. With the launch of this, we have moved a step closer to our commitment of delivering the best gaming products for gamers at every level.”

In terms of connectivity, the CPU has a Gigabit Ethernet and 802.11 ac/a/b/g/n wireless LAN with Bluetooth 4.2. If you need more power, there are four PCIe x16 expansion slots along with 2 x M.2 slots for SSDs. There is another M.2 slot for an extra WLAN card if you require. You also get a 16X DVD-RW drive. A 1000W PSU powers the whole unit