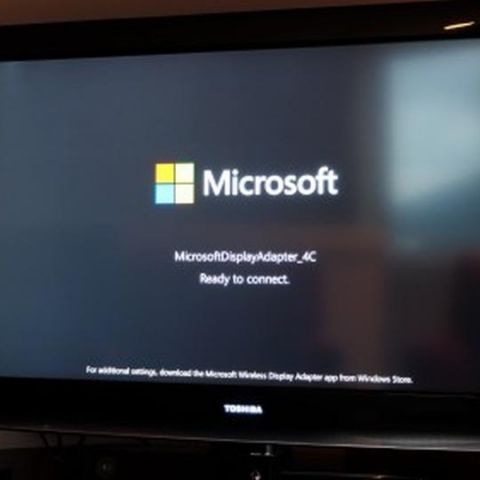 Microsoft unveils a wireless display adapter for $60 that can be paired with your Android or Windows device to stream data to your HDTV.

Microsoft has unveiled a Google Chromecast-like wireless display adapter for Miracast screen streaming. The adapter is available for preorder for $60 in the United States and Canada and will be available in stores from October.

The Wireless Display adapter has a two-headed cable with 3.46 inches dongle and an HDMI jack on one end while on the other end it function as a USB. The heads are compatible with projectors, TV and monitors which can transform the display into a receiver for mobile phone. With Miracast technology the user can be able to stream or stretch out the screens with compatible devices. Microsoft stated that the Wireless Display Adapter provides a reliable connection that may cover up to 23 foot radius. It is compatible with Miracast-enabled Windows 8.1 devices, as well as Android 4.2.1 or later based smartphones or tablets. Read: Microsoft introduces cross-platform Bluetooth mobile keyboard

Brandon LeBlanc of Microsoft said in a blog post, "Today we’re announcing the Microsoft Wireless Display Adapter, which connects to an HDTV, monitor, or projector and will let you easily share content from any Miracast-enabled device – including many PCs and Tablets running Windows 8.1. With the Wireless Display Adaptor, I don’t have to worry about getting everyone to huddle around a device. All the content I care about, along with audio, is easily shared on the big screen."

Google launched Chromecast “dongle” for $35 earlier this year. Chromecast has a beta app that allows the user to stream Android’s display into the TV. It is restricted to streaming from apps like Hulu, Netflix, YouTube and Chrome on Chromecast.

Snapdeal recently launched a Chromecast like media streaming dongle Teewe for an affordable price of Rs 1,999. Teewe has to be hooked up with your TV’s HDMI port and can be controlled by a smartphone app. It lets you stream content from YouTube, movies, photos and music stored on your PC once connected to the same Wi-Fi network.