Xiaomi had launched their big form-factor Mi Max 3 in July earlier this year, but at the time, the launch was exclusively for China. The company had stayed mum on the topic of bringing the Mi Max 3 to other countries, that is, until today. The company has tweeted out a teaser which alludes to the global launch of the Mi Max 3.

The tweet sent out by the company reads “something really BIG is coming your way” along with a picture of a seemingly large, bezel-less smartphone with the 18:9 aspect ratio. The tweet by itself is pretty generic and doesn’t carry any more details, but if the phone is gearing up for a global launch, there is little reason to believe that Xiaomi won't launch the phone in India as well. India has been an incredibly strong market for Xiaomi over the last few years. 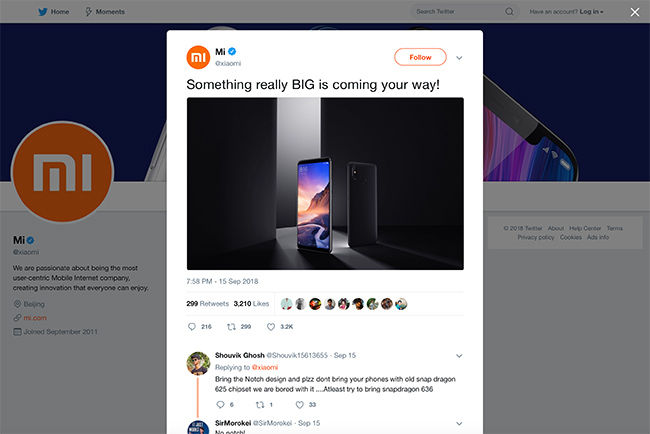 The Xiaomi Mi Max 3 that launched in China sports a 6.9-inch Full HD+ (2160 x 1080 pixels) display with an 18:9 aspect ratio. Powering the smartphone is the Qualcomm Snapdragon 636, an octa-core processor paired with 4/6GB of RAM. The 4GB RAM variant comes with 64GB of onboard storage while the 6GB RAM variant sports 128GB of onboard storage. Both the variants will sport a hybrid SIM slot in case users want more storage. In terms of imaging, the Mi Max 3 carries a dual-camera setup with a 12+5 Megapixel count. For selfies, you get an 8-megapixel shooter with an aperture of f/2.0 and a soft LED flash. Both the cameras also leverage scene recognition to better optimize the colour and contrast in the scene. Last but not the least, the Mi Max 3 is expected to launch with MIUI based on Android 8.1 Oreo right out of the box. The phone will sport a 5,550mAh battery and Quick Charge 3.0. What we will wait to see is whether Xiaomi will provide a fast charger in the box.

As of now, there is no price of timeline for the global or India release of the Xiaomi Mi Max 3, but given that the company has started teasing the phone, we can expect the phone to launch very soon.