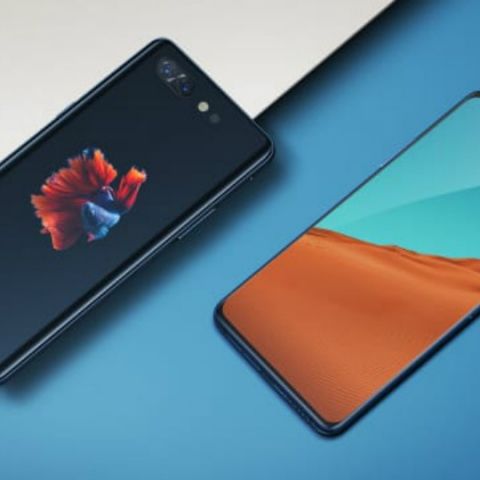 2018’s smartphone story can be divided in two parts. The first part where OEMs worked to put the notch on top of the display and then the sequel where they worked to remove it. In the second half of this year, we’ve seen efforts from Vivo, Oppo, Xiaomi and Honor to remove the notch they so gladly put in phones that launched in the first half. The workaround all of them chose is to make the front camera mechanical. Now Nubia, another Chinese smartphone maker has come up another ingenious way to remove the notch — Add another display at the back to take see your selfies in action.  The Nubia X that launched Wednesday in China comes with two touchscreen displays, one at the back and another up front.

The flagship phone from Nubia is essentially a selfie smartphone, but without a front camera. It houses two sensors at the back — A f/1.8 aperture 16-megapixel sensor and another 1/.7 aperture 24-megapixel camera. The two cameras work in tandem to capture portrait shots and has AI scene recognition, dual pixel PDAF and 240 fps slow-motion video capture. There’s also a dual-tone LED flash and another soft-light LED flash for selfies.  The rear display doubles up as a viewfinder when taking selfies. It’s a 5.1-inch OLED display with a resolution of 1520x720 pixels that sits flushed to the body.

On the front, there’s a 6.26-inch FHD+ LCD panel that stretches almost to the edges. The phone is powered by the flagship Qualcomm Snapdragon 845 SoC coupled with up to 8GB RAM and 256GB storage. There are lower RAM and storage variants as well, and will be available in Deep Gray, Black Gold and Sea Blue colours.

The second display at the back can also work as your primary screen. There are two capacitive fingerprint sensors on each side bezel that double up as your home and back button. Needless to say, using this phone will require new muscle memory. You’ll need to tap on each fingerprint sensor to switch screens, or let the phone’s behaviour recognition software to do it for you automatically. The rear panel can also be used as additional buttons while playing a game. Although how practical that will be remains to be seen. Remember the PS Vita also had touch-based controls at the back, but it never really took off.

The Nubia X also has a software-based three-level blue light filter which is certified by TUV Rheinland on the OLED panel which could be a primary reason to switch to the panel at the back. The blue colour variants of the smartphone also come with a physical blue light filter integrated in the rear display and are a little more expensive.

When not using the display at the back, it can be set to be an always-on panel and you can either have a clock, or a live wallpaper at the back. All in all, the implementation, on paper, looks neat, perhaps a tad over-engineered.

All that screen will surely need a lot of juice to last the day. Nubia installed a 3,800mAh battery with Quick Charge 3.0 that tops up the battery with a bundled 18W fast charger. Nubia claims the phone has a ultra-low power mode that kicks in when the battery is at 5 percent and can last the phone for 3 hours more.

The phone will only be available in China for now with no plans whatsoever for a global launch. It also comes with Android 8.1 Oreo even when phones are already releasing with Android 9.0 Pie out of the box. The base 6GB+128GB variant will retail for 3,299 Yuan (Rs 35,000 approx) while the 8GB+128GB variant will be available for 3,699 Yuan (Rs 39,000 approx). The top of the line 8GB+256GB variant will be sold for 4,199 Yuan (Rs 44,500 approx). All the variants are offered in blue colours that will cost 100 Yuan more because of the physical blue-light filter. Now that’s a smartphone I’d like to review.