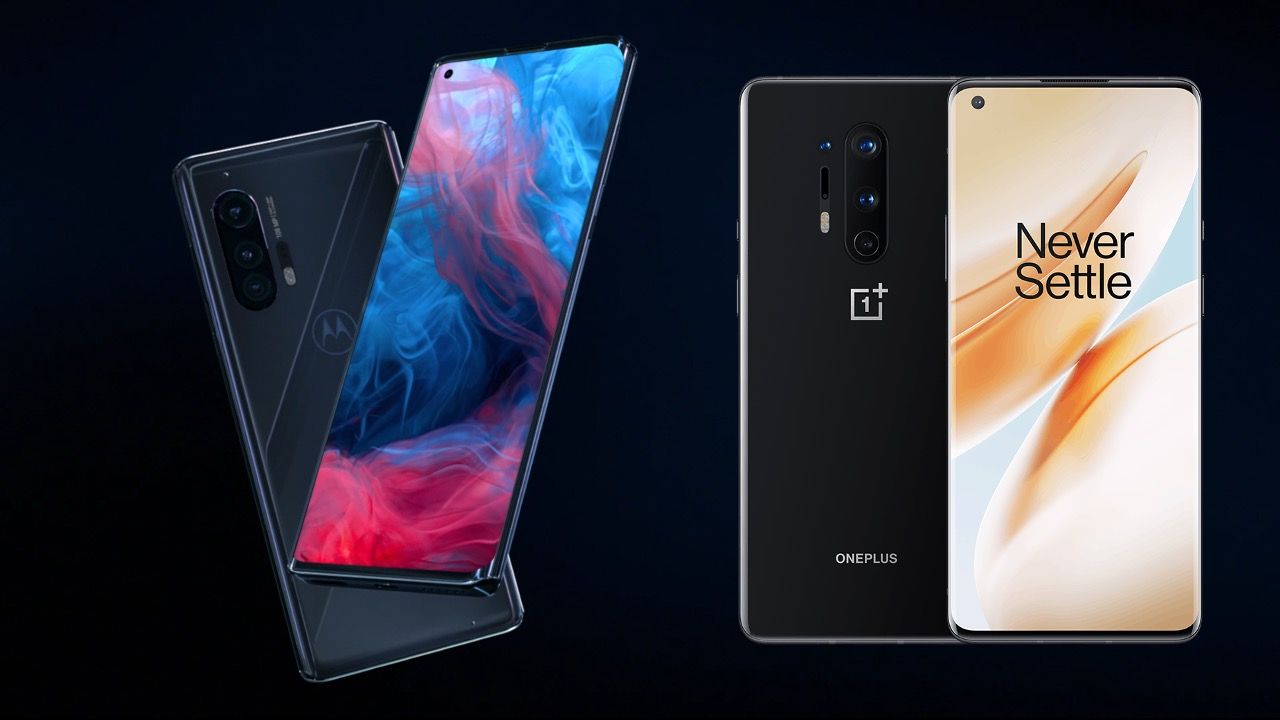 Motorola Edge+ was just unveiled at a virtual event hosted by the company due to the Coronavirus pandemic that has forced people to stay at home, with most businesses taking a direct hit due to slowdown. However, smartphone companies are coming up with new phones with online launches now. OnePlus did it for its OnePlus 8 series and now Motorola is re-entring the flagship segment after two years with the Edge+.

The phone follows the current trends adopted by the current crop of flagship phones with the latest Qualcomm processor, high-refresh-rate display, versatile camera setup and a big battery to power it. The same is also true for the recently launched OnePlus 8 Pro which is why we decided to pit both phones against each other for this specification-based comparison.

Motorola Edge+ is priced at $999 in the US but its Indian pricing hasn’t been announced yet. By the current conversion ratio, the Edge+ could be priced around Rs 76,000 in India. As for the OnePlus 8 Pro, it starts at Rs 54,999 for the base variant with 8GB RAM and 128GB storage while the maxed-out model with 12GB RAM and 256GB storage retails for 59,999 in India. Interestingly, the OnePlus 8 Pro is much affordable in India than in the US.

Having said that, there’s no word when the Coronavirus lockdown will end in India and deliveries of non-essential goods be permitted. So, we’ll have to wait a while before we see the Edge+ launch in India.

Motorola Edge+ has a metal and glass design with a display that wraps around the edges and is dubbed the “waterfall display”. It measures 9.6mm at it’s thickest point and weighs 203 grams. On the other hand, OnePlus 8 Pro is also built using an aluminium chassis and glass back but is thinner than the Edge+ at 8.5mm thickness and is lightweight at 199 grams. The rear panel of the phone is also coated with a layer of Gorilla Glass which is missing from the Edge+. The 8 Pro is also IP68 certified making it resistant to dust and water.

The Edge+ features a 6.67-inch display that uses an AMOLED panel flushed with a punch-hole cutout in the top-left corner that houses the selfie camera. The display has a Full HD+ (2340 x 1080 pixels) resolution,  90Hz refresh rate support and is certified to playback HDR10+ content.

OnePlus 8 Pro features a slightly larger 6.78-inch AMOLED screen that has a QHD+ (3168 x 1440 pixels) resolution and supports 120Hz refresh rate. Like the Edge+, the display is certified for HDR10+ playback but is topped by Gorilla Glass coating for added protection against daily wear and tear.

Being flagship phones in their own right, both the phones come fitted with an in-display fingerprint sensor for easier phone unlock.

OnePlus’ display has also received critical appreciation from DisplayMate and has broken over 13 records in their benchmarking tests. That’s why it’s rated as A+ but we still have to get our hands on the phones to have a detailed look.

Motorola Edge+ vs OnePlus 8 Pro: Under the hood

Motorola Edge+ marks the comeback of a flagship smartphone in the company’s catalogue as it is powered by top-of-the-line Qualcomm Snapdragon 865 chipset with built-in 5G support. The new processor gets a decent 25% bump in performance while leveraging Qualcomm’s fifth-generation AI Engine.

This is paired with 12GB RAM and 256GB storage with an option to expand the storage by upto 1TB using microSD card.

On the other hand, OnePlus 8 Pro is powered by the same chipset but comes in two storage variants. The base model has 8GB RAM and 128GB UFS 3.1 storage followed by the maxed-out version with 12GB RAM and 256GB storage.

Motorola Edge+ runs on stock Android 10 out-of-the-box with some specifications customizations done by the company and not to forget, the popular Moto Actions also make a return.

However, OxygenOS on the OnePlus 8 Pro is a whole different ball game altogether as it has been tweaked and optimised in such a way that it’s fast and smooth in general use at all times. The phone also has a dedicated MEMC chip built-in that’s responsible for smoothening out low frame rates video playback.

With the latest powerful processor underneath, both the phones are expected to offer great performance, it’s just the optimizations done at the fundamental level make the experience better, something that OnePlus is known for.

Other than that, both the phones feature a decent array of sensors and connectivity features. The 8 Pro supported Wi-Fi 6, Bluetooth 5.1 with aptX HD codec while the Edge+ comes with Bluetooth 5.0.

The Edge+ has a triple camera setup that consists of a primary 108MP camera with an f/1.7 aperture, an 8MP telephoto lens with 3x optical zoom and a 16MP ultra-wide-angle lens with 117-degree field-of-view. The main camera can record in 6K UHD at 30fps and is supported by OIS. On the front, there’s a 25MP selfie camera housed within the punch-hole notch cutout with an f/2.0 aperture.

OnePlus 8 Pro features a quad-camera setup that consists of a primary 48MP camera with an f/1.8 aperture, a secondary 8MP telephoto lens with 3x optical zoom, a 48MP ultra-wide-angle-lens and a 5MP depth sensor to assist in portrait photography. The rear cameras can do 4K UHD videos at upto 60fps and is supported by EIS and OIS on the primary sensor. On the front, there’s a 16MP selfie camera with an f/2.5 aperture and supported by EIS.

Both the phones come with a versatile array of camera sensors, but we’ll have to test the phones ourselves to form an accurate opinion about the photography capabilities of the Edge+ and OnePlus 8 Pro.

Motorola Edge+ is fitted with a 5,000mAh battery that supports 15W fast charging thanks to the company’s TurboPower solution. The phone also supports fast wireless charging at 15W peak output.