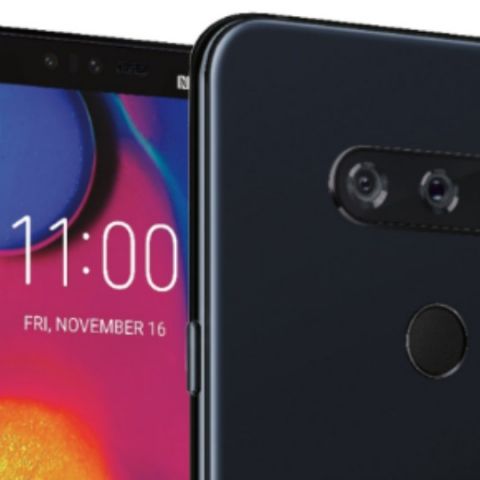 Leakster Evan Blass shared an image of the LG V40 ThinQ for AT&T which also shows two-front facing cameras and an extra button on the edge.

There have beenmultiple leaks and teasers surrounding the upcoming LG V40 ThinQ smartphone that will launch on October 3 in New York. The company has already teased a triple camera setup on the back panel in a video which one can now see in a new image posted by famous leakster Evan Blass on Twitter. The alleged image of the LG V40 ThinQ shows the three rear cameras horizontally aligned on the back and two front facing shooters. This cements the five-camera claims made by previous renders and leaks.

The leaked image also shows a total of four buttons distributed on either edges of the smartphone. It is suggested that two buttons make the volume rocker, one is the power button and the fourth button will be used for summoning an AI-powered virtual assistant, possibly the Google Assistant. LG had released an invitation video on its official website in South Korea teasing three rear cameras: One with a wide-angle lens, another with zoom capabilities (telephoto lens) and a third one dedicated to capturing portrait images. Alongside the video, the South Korean tech giant also announced that after the event in New York, it will launch the smartphone on its home turf on October 4.

An LG phone with model number LM-V405UA was spotted on the Federal Communications Commission (FCC) website in the US. Several media reports had claimed that this model number belongs to the LG V40 ThinQ. The front cameras are said to be enclosed in the notch with other sensors. But Evan Blass’s image doesn’t show a notch and it is possible that the notch is hidden in the image. There is a fingerprint sensor on the back and it is speculated that the device could also come with the Face Unlock feature. When it comes to the hardware, the phone is expected to be powered by Qualcomm’s Snapdragon 845 processor. The LG V40 ThinQ could feature a 6.3-inch OLED or pOLED panel with QHD+ resolution.