The Honor V20 features an All-View Display with thinner bezels all around and comes with a 48MP main camera. 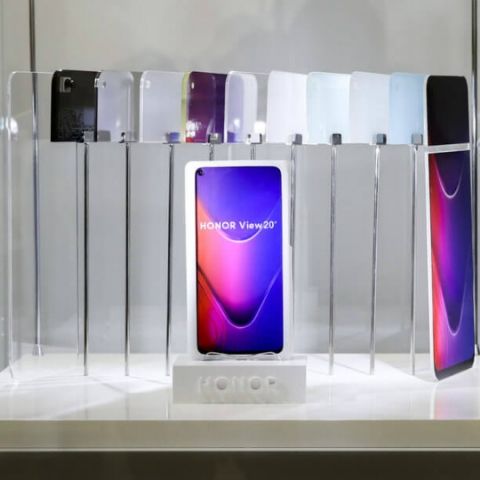 Earlier this month, Honor V20 was officially announced by the company and it will be launched in China today. While we already know some specs of the phone, along with the design of its from the front, there are many other things that are yet to be revealed. The phone is confirmed to features a punch-hole front-facing camera and the company is calling it an All-View Display design. The handset also features a 48 MP rear camera and comes with a Link Turbo technology that is said to enable faster download speeds by leveraging both Wi-Fi and cellular connectivity. Ahead of the launch, its design and some more specifications have also leaked out.

Launch of the Honor V20 is slated to commence at will be live streaming its launch event of the Honor V20 at 3pm CST (12:30 PM IST). You can watch the event here. The company will unveil the device globally in an event set for January 22, 2019.

Honor has already unveiled that its V20 is powered by the HiSilicon Kirin 980 SoC, which is the company’s latest flagship chip with dual NPU and ISP. The phone also features a 48MP rear camera which employs the Sony IMX586 sensor. The camera makes use of AI with the help of dual-ISP and dual-NPU on the Kirin 980, and is said to automatically perform multi-frame image processing for capturing better, more detailed images. The device's main camera features a massive 1/2.0-inch CMOS sensor with 0.8 µm/pixel configuration and 4-in1 Light Fusion, which is basically pixel binning technology. However, a new report suggests that there might also be a ToF (Time of Flight) 3D camera sensor on the back. The phone is said to be announced today in three variants, two with 6GB RAM and with options between 64GB and 128GB of internal storage, another with 8GB RAM and 256GB of onboard storage

In terms of the display, Honor says that the V20’s screen extends to “almost” 100 percent, thanks to the punch hole design for the front camera. Additionally, the new cutout design is said to have been achieved with the help of an 18-layer technology stack. The front camera cutout is 4.5mm in diameter and as mentioned earlier, the new display design is being called Full-View Display 3.0. The handset also features a new Link Turbo option, which is said to assess network conditions to automatically switch between Wi-Fi or 4G networks. A similar option comes built-in in Android phones. However, what’s new is that Honor’s Link Turbo tech is said to be capable of boosting download speeds by adopting both networks. It’s not clear whether both Wi-Fi and cellular networks are used simultaneously or not.

The handset could also feature AI dual-frequency GPS for enhanced accuracy and is expected to be launched running on EMUI 9 based on Android Pie out-of-the-box. The phone might feature a 4,000mAh battery and come with 22.5W fast charging support. In terms of pricing, the Honor V20 was previously listed on Tmall and the listing suggests that the phone's 6GB RAM+64GB storage model might cost 2,799 Yuan (approximately Rs 28,453), while the device's 6GB RAM + 128GB internal storage will be available for 3,299 Yuan (Rs 33,535 approx).