Google Pixel 3a, 3a XL to launch today: How to watch live stream, specs and expected pricing

Follow Us
HIGHLIGHTS
Google Pixel 3a, 3a XL to launch today: How to watch live stream, specs and expected pricing

Google is expected to announce two new Pixel handsets today, on May 7, at its I/O 2019 event. The company is rumoured to introduce the Google Pixel 3a(₹ 30999 at flipkart) and 3a XL smartphones today and seeing as how Google and Flipkart are teasing the launch of a device, the phones are most likely to be made available in India as well. Numerous leaks and reports about the two phones suggest that they might be more affordable versions of the existing Pixel 3 and 3 XL handsets. However, they are rumoured to retain the same great camera quality we’ve observed on the Pixel 3 (review). Here’s all you need to know about the soon to be launched phone:

How to watch the live stream

Google is hosting its I/O 2019 event at its Shoreline Amphitheatre in Mountain View, California.  The keynote address starts at 10AM PDT (or 10:30PM IST) and it will most likely be May 8 by the time the phones are launched. The event will be live streamed on YouTube but you can watch it directly from the video embedded below. We will be covering the event so, stay tuned to Digit to be up to date with everything.

Google Pixel 3a and 3a XL leaked specifications

Both the Pixel 3a and Pixel 3a XL smartphones were recently spotted at a Bluetooth certification website, which confirmed their names. Multiple leaked renders of the phone hint at a design similar to the smaller Pixel 3, which sports an 18:9 display without a notch. Additionally, the handsets are expected to feature a dual-tone design on the rear panel, along with a single rear camera setup and a fingerprint sensor.

The Google Pixel 3a and Pixel 3a XL reportedly feature a 5.6-inch and 6.3-inch OLED display respectively. The smaller Pixel 3a could be powered by the Snapdragon 670 SoC and come with 4GB RAM, while the more powerful Pixel 3a XL is tipped to be backed by the Snapdragon 710 SoC. Both the phones are expected to be running on Android 9 Pie and be one of the first ones to receive the Android Q update when it is made available. The retail box of the Pixel 3a XL was also recently spotted on Best Buy. 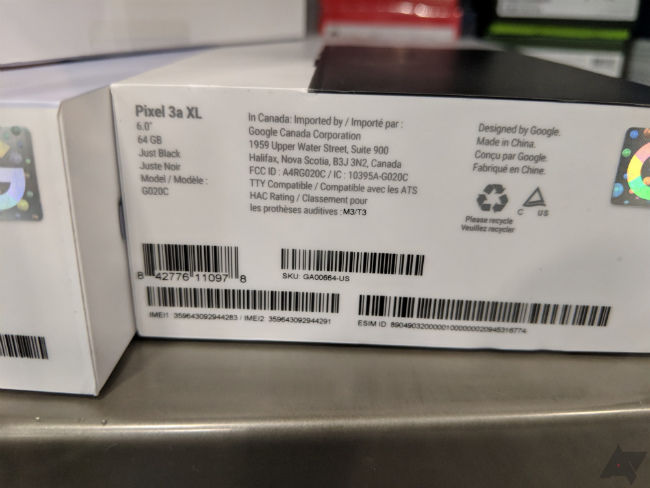 While the Pixel 3a might pack a 3,000mAh battery, there's no info on the battery capacity of the Pixel 3a XL. The phones could also resurrect the headphone jack, which Google killed off with the Google Pixel 2 smartphones. Rumours also suggest that the phones will feature Google’s Pixel Visual Core chip for image processing.

A new report leaked the pricing of the Google Pixel 3a XL smartphone. As per the tipster SlashLeaks, the Pixel 3a XL with 6GB RAM and 64GB storage could be announced at Rs 44,999. The leak also tips at some of the aforementioned specs of the phone like its display size, a 12.2MP rear camera and more.