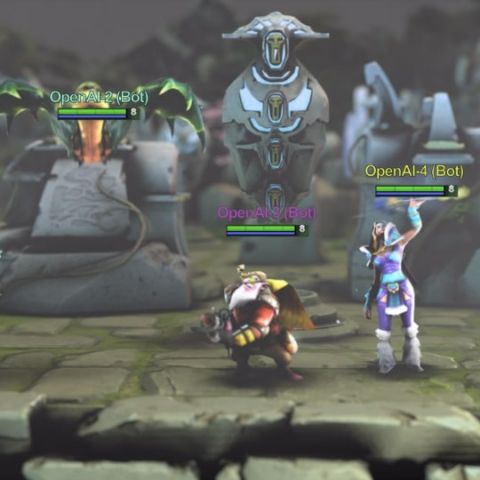 OpenAI managed to beat Dota 2 gamers in a 1v1 match last year. But this year, will be be fielding a team of five neural networks to compete in 5v5 matches.

Last year, a bot designed by OpenAI managed to beat Dota 2 pros in at 1v1 game at Valve’s premier Dota 2 gaming tournament, The International. Now, it seems like the Elon Musk-backed research lab is coming back with all guns blazing. OpenAI has now created a team of five neural networks to compete in 5v5 matches. The team, called the OpenAI Five, will also be challenging top players at The International once again. The tournament will be held in August, and offers a total prize pool of nearly $40 million, more than any other e-sport.

OpenAI states that the team plays 180 years worth of games against itself everyday, learning via self-play. It obviously runs on a scaled up version of the system that beat Dota 2 players last year. This version runs a variant of Proximal Policy Optimization running on 256 GPUs and 128,000 CPU cores. By comparison, the bot that beat plays at 1v1 games was running on 256 GPUs and 60,000 CPU cores.

OpenAI notes that teaching AI to play video games like Dota 2 is harder that board games like Chess or Go. In Dota, the AI will only be able to see a limited area of the map as units and buildings are only able to see what’s around them. The rest of the map is hidden in a fog that hides the enemy’s movements and strategies. As a result, the AI has incomplete information. In Chess and Go, the entire play area is revealed to the AI, letting it also calculate the opponent’s possible moves.

The Verge notes that the reason for the research is pretty straight forward. By teaching AI how to play complex video games, we might be able to use them to solve complex real world challenges that might resemble video games. This could include things like managing a cities transport infrastructure. “This an exciting milestone, and it’s really because it’s about transitioning to real-life applications,” OpenAI’s co-founder and CTO Greg Brockman told the publication. “If you’ve got a simulation [of a problem] and you can run it large enough scale, there’s no barrier to what you can do with this.”

It’s still too early to judge if OpenAI Five will be able to emerge victorious at The International. The team has a number of limitation in place. For starters, the team can only play using five of the 115 heros that are available (Necrophos, Sniper, Viper, Crystal Maiden, and Lich if you’re curious). They are also limited in terms of the decisions the AI will make as well as some abilities. This includes no invisibility, no warding, no scanning and more.

However, the AI also brings with it a number of advantages over its human opponents. To begin with, the reaction times of the AI is faster and it will not miss any click. It will also have quick access to inventory items. OpenAI’s bots have currently played five multi-game matches against amateur and semi-pro teams, in which they won four times and drew once. But at The International, it will be up against some of the best gamers in the world. So it’s still anyone’s guess if it will be able to win the tournament.