The support for 360-degree videos is being introduced to Android and web platform users first, while iOS users will receive the update in near future 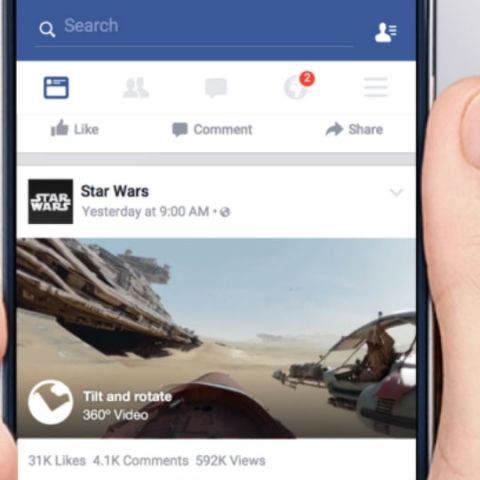 Facebook has announced support for 360-degree videos on News Feeds. The new development was posted on Facebook's official blog by Maher Saba, Engineering Director of Video. The support is rolling out to users on Android and web platforms first, while iOS users will receive it soon. Facebook's case study of users enjoying more immersive content on the news feed has led to introducing these videos.

Like virtual reality video clips, the 360-degree augmented reality videos facilitates viewing from a participant's perspective. Experiencing them on phones will need the videos to be panned using finger input, or by turning the device in the required direction. The mouse pointer will need to be used for viewing the content on a web browser

At the moment, publishers like Star Wars, NBC’s Saturday Night Live, Discovery, and a few others that are sharing 360-degree videos on Facebook. Disney and Lucasfilm have also decided to debut an exclusive 360-degree video of Star Wars: The Force Awakens, adding augmented reality experience of the Star Wars universe to fans. Over the coming days, general users will also be able to add their own 360-degree videos to their own profiles.

The introduction of 360-degree videos on social media is not a first. Last year, YouTube had added support for 360-degree videos. VR gears like the Google Cardboard and Oculus Rift are bringing the augmented reality experience to a wider mass. Alongside commonplace usage through apps which enlist 360-degree videos, companies have started using the virtual reality (VR) technology for promoting products. Earlier this year, OnePlus used VR technology for the launch of OnePlus 2 in India. The company sold and distributed its own VR headsets, the OnePlus Cardboard, to users who were interested in experiencing the launch event.