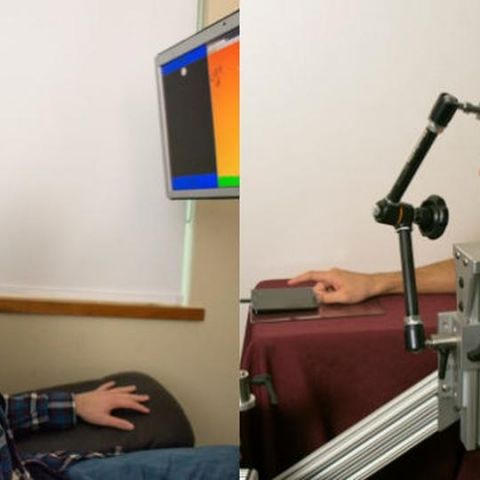 Researchers at the University of Washington were able to successfully replicate a direct brain-to-brain connection between pairs of people as part of a scientific study.

Researchers were able to transmit the signals from one person’s brain over the Internet and use these signals to control the hand motions of another person within a split second of sending that signal. The study was conducted over six people divided into three pairs: one receiver and one transmitter.

The transmitters are hooked to an EEG machine to read brain waves and are asked to sit in front of a video game. In the game they have to defend a city by firing cannons, however the transmitters could only transmit their thoughts via the internet to their partners seated somewhere across the campus who have a touchpad that controls the cannons.

The receivers, wear a swimming cap with a coil placed on top of the part of their heads where the brain controls hand movements. Theirs fingers are poised on top of a touchpad that controls the cannons, but they cant see the game. The researchers found that the receivers would act within a split second of the transmitters sending a signal. The teams accuracy varied between 25 and 83 percent, the researchers state that the delay in launching cannons was mostly the transmitters fault for not executing the accurate thought that triggers response in their partners.

The team had published similar findings an year back is which they demonstrated two human brains communicating in this way. “The new study brings our brain-to-brain interfacing paradigm from an initial demonstration to something that is closer to a deliverable technology,” said co-author Andrea Stocco, a research assistant professor of psychology and a researcher at UW’s Institute for Learning & Brain Sciences. “Now we have replicated our methods and know that they can work reliably with walk-in participants.”

The team of researchers have secured $1 million in funding and plans to conduct tougher experiments, involving the transmission of more complicated thoughts and ideas between two people. The team is planning to develop a method to directly transfer knowledge from one brain to another. "Imagine someone who's a brilliant scientist but not a brilliant teacher," said one of the researchers, Chantel Prat. "Complex knowledge is hard to explain -- we're limited by language."