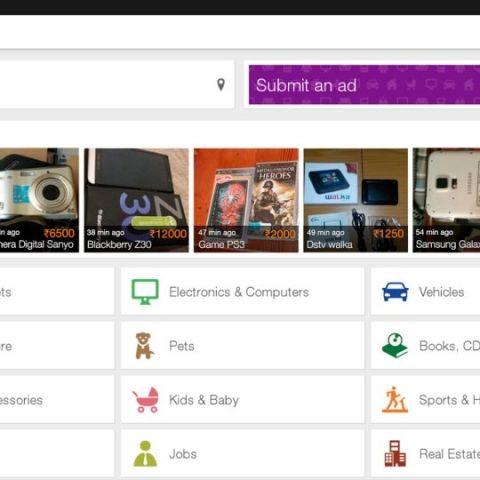 E-commerce site OLX has just released its OLX Crust Survey 2015 revealing urban Indian households are hoarding about a whopping Rs. 56,200 crores worth of unused goods. The last year Crust estimated the market for used goods to be Rs. 22,000 crore.

The survey says Rs. 56,200 crore is so huge that it can be used to launch the Mars Orbiter Mission Mangalyaan 125 times over, can clear arrears of the Food Corporation of India and is one and half times the annual budget allocation for the MNREGA.

Interestingly, the figure Rs 56, 200 crore comes majority from metros and Tier 1 cities (60%). According to the survey, on an average each urban Indian home is stocking an estimated Rs. 8400 worth of used goods. This figure is as high as Rs. 19,500. in tier-1 cities.

Clothing, kitchen utensils and books are the most stocked items in India with 40%, 34% and 27% households stocking them respectively. 87% of households said they have items lying unused at home – Mumbai was the lead stocker with 99%, KolKata followed closely with 98%.

Amarjit Singh Batra, CEO, OLX India says, “Before we instituted CRUST in 2013-14, there were only guess estimates on the size of the used goods market in India. CRUST for the first time put a figure on this market – INR 22,000 Crore in 2014, and INR 56,200 Crore in 2015 just in urban India. If we take the whole country into account, then this number will be much higher. At OLX we are committed to helping people unlock the money hidden in used items. From a country of scarcity, we are moving towards a country of abundance for at least some people. People are buying more, consuming more, and in the process wasting more. OLX helps people waste less through collaborative consumption and extending the life-cycle of the products.”

“As a brand, OLX aspires to positively impact the nation, the environment, and the lives of people. Brown Money has a favorable impact on personal finances and the overall economy. By helping goods find right homes, we are also ensuring greater utilization of products and less wastage. And by providing a platform for people to sell and buy used goods, we are managing to touch their lives by helping them fulfill their aspirations,” added Amarjit.

Consumer behavior towards used goods (regional perspective): While Northern India tops the selling chart with 48% households doing so, the Eastern region leads stocking with 97%, and the West is the frontrunner in buying of used goods. 83% of Delhi households have unused items lying at home. Kolkata residents seem to be the most eager to sell their used goods - 85% respondents said so - while Bengaluru is the least-selling friendly metro. The heritage city of Lucknow records the highest sale of books with 31% people selling off their used books.

Why does India Stock: The key reason for stocking remains to be a wish to use these goods at a later date. (31% households said so). 18% owe their stocking habits to the sentimental value attached with the goods.

Why does India Sell: Aspirations play a key role here. The wish to upgrade to better products triggers about 51% of the respondents to sell; close to 33% people sell used goods because they feel that the goods are simply lying at home unused.

Why does India Buy: While, overall, the highest motivational factor for buying used goods is that these products are less expensive than new goods (69% said so), 50% respondents also buy used goods because the product quality meets their requirements.

What does India Stock? The top three categories of goods stocked across India are Clothing, Kitchen Utensils, and Books. This is followed by mobile phones.

What does India Sell? Books are the highest sold product with 17% having done so in the last one year. Categories with high value and high perceived usability such as mobile phones experience a higher incidence of selling compared to last year.

What does India Buy: Mobile phones and Consumer Durables are the highest bought categories across the country.

What is young India thinking/doing: Young adults* constitute a large part of the Indian population and they play an instrumental role in defining the trends in the country. The CRUST Survey for 2014-15 has taken an in-depth look into their behavioral pattern to find that 87% of young adults stock goods. 51% young adults sell used goods to upgrade to better products and lifestyle. 23% of people in the age group of 19- 23 years bought 3-5 used goods last year.