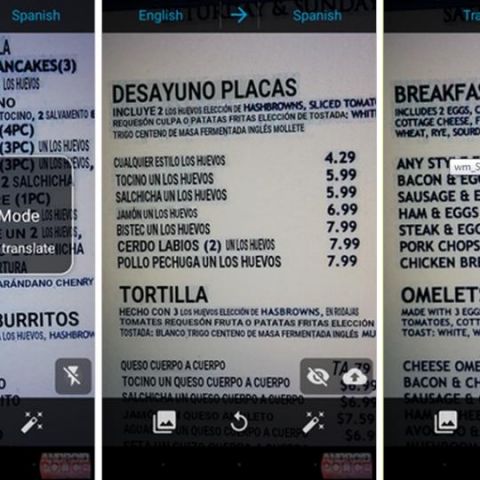 New version of Google Translate will bring the ability to decipher words in images and better speech recognition.

The next build of Google Translate will reportedly help users translate spoken words instantly as well as use their smartphones camera to translate text in images, according to a report.

Android Police reports that the new version of Google's translation app adds features courtesy of Google’s acquisition of Word Lens, an application that instantly translates words and signs by simply pointing the phone’s camera at them. The internet giant is about to include this functionality in Google Translate that will allow users to quickly translate menus, signs, directions and any other pictures containing text in a foreign language.

The conversation mode of Google Translate, which allows two users speaking two different languages talk in real-time, will get even easier and faster with the new update. According to reports the updated Android app will be constantly listening for both languages being spoken, and automatically translate them. The current version of Translate requires the user to manually select each language in sequence.

The Live Translate in Google Translate will work only with some languages, including English, Italian, French, German, Russian, Portuguese and Spanish initially. The app allows you to translate from and to English but doesn't have the functionality to translate say from German to Russian yet. The report doesn't mention when the new version of Google Translate will be rolled out, but users can try out this functionality in the original WordLens app, which can be downloaded free from the Google Play Store. Read: Google acquires travel app maker Jetpac, hints at integration with Google Maps