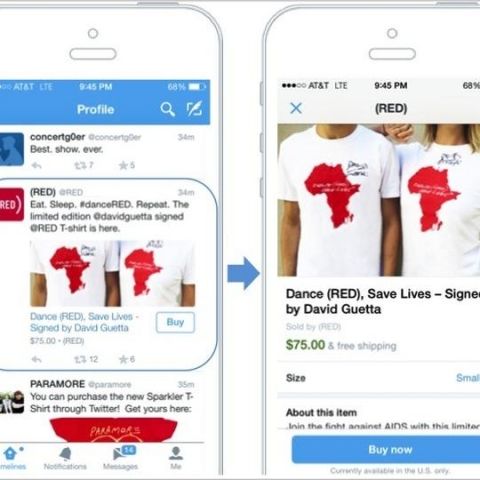 Twitter has announced testing a "buy" button on "small percentage of US users" and a limited number of commercial partners are due to begin shortly, according to a blog post. The buy button will be inside tweets and will allow users to purchase items directly from the site.

Once the users clicks on the buy button, they will be prompted by the micro blogging site to enter payment and shipping details. A registered user has to just tap the button again to confirm purchase. This is an attempt by Twitter to generate more revenue by means other than advertising. Before this users could buy via Twitter by sending public messages with a special hashtag in them to confirm purchase of an item.

“For a small percentage of U.S. users (that will grow over time), some Tweets from our test partners will feature a “Buy” button, letting you buy directly from the Tweet,” the Twitter blog announced. The blog added “This is an early step in our building functionality into Twitter to make shopping from mobile devices convenient and easy, hopefully even fun.”

Rumors about Twitter's a new online retail venture called 'Twitter Commerce', had been making the rounds for a while now. Earlier in July, Amazon India had rolled out #Amazoncart shopping feature in India which allows users to order items via Twitter. Amazon India's #AmazonCart tagline reads, "Add it now. Buy it later. Shop from within Twitter." The feature allows users to add products in their Amazon shopping cart without leaving the micro-blogging site.