It will also give users a 4K Set Top Box with subscriptions to 10 OTT apps for all new users.

JioFiber customer, then there is good news for you especially if you are interested in getting a new JioFiber connection, or have acquired one recently. The company has announced a no-condition 30-day free trial for its broadband service where customers get speeds of 150 Mbps with truly unlimited data. Users also get access to a 4K set-top-box with subscriptions to 10 OTT apps for all new users. For the duration of the free trial, users get access to the Rs 999 plan for one month after which the plan changes to the one selected by the customer. The details are as follows.

Who qualifies for the JioFiber 30 days free trial?

What are the new benefits?

Well, to begin with, there is truly unlimited data on offer with the JioFiber plans. Also, all home plans will have symmetric speed, that is download speed = upload speed. The plans on offer from JioFiber are as follows 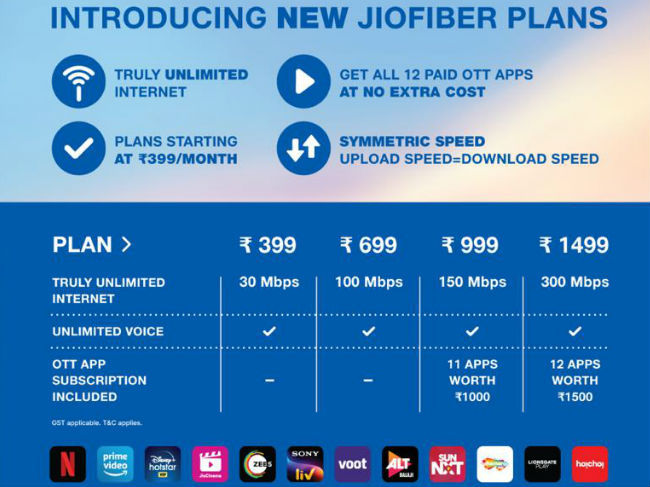 Commenting on this development, Mr Akash Ambani, Director, Jio, said “JioFiber is already the largest Fiber provider in the country with over a million connected homes, but our vision for India and Indians is much larger. We want to take Fiber to each and every home and empower every member of the family. After making India the largest and the fastest-growing country in mobile connectivity with Jio, JioFiber will propel India into global broadband leadership, thereby providing broadband to over 1,600 cities and towns. I urge everyone to Join the JioFiber movement to make India the broadband leader of the world."