The new Mozilla Quantum browser is based on an overhauled core engine and comes with a new CSS engine, which is said to be more power efficient 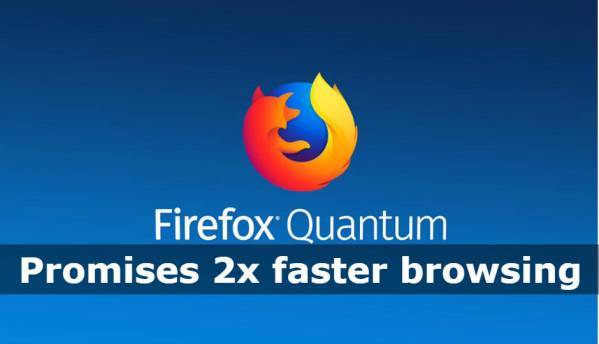 Mozilla has announced its new Mozilla Quantum browser, which the company claims is twice as fast as compared to their Firefox 52 browser that was released six months ago. They also say that the browser uses 30 percent lesser memory as comapred to other competing browsers.

The new Quantum browser comes with a new overhauled UI called “Photon” and a new CSS engine called "Stylo." The company says takes better advantage of a system's low power consumption cores. Mozilla says that the new Photon UI was built by studying how people browse the internet and its integration with Pocket now includes recommendations alongside a user’s most visited pages.

Futher, Google will now be the new default search provider in the United States, Canada, Hong Kong and Taiwan. Firefox Quantum will also come with more than 60 search providers pre-installed with more than 90 languages. The company says that the new browser will prioritize the current tabs user is working on, over all other open tabs in order to make better use of system resources. The new browser is available for Windows, Mac and Linux, and will also be available on iOS and Android.

Back in August, Mozilla had updated its Firefox browser for desktop to version 55. The new update came with web-based VR support for Oculus Rift and HTC Vive headsets. The update also brings a beta feature called ‘Firefox Screenshots,’ which allows users to take, save and share screenshots from within the Firefox browser itself.