Mozilla details progress of Firefox in 2012 with neat infographic Firefox as a browser has seen some major updates in 2012 and all of them were for the better. In 2012, the browser shipped in 89 languages and passed 3 billion Firefox Add-ons downloaded. It is safe to say that the browser has become better than what it was a year ago.

The Firefox OS too has seen some progress over 2012. The Mozilla blog says, “Together with our partners, the Firefox OS team is building the world’s first Open Web Device, and along the way we’ve introduced nearly 30 new Web APIs to bring the power of mobile apps to the open Web.” The blog goes on to say, “More than 19% of Firefox for Android users, and 8% of desktop users have enabled Do Not Track, proving to the world that there is a real user appetite for choice on issues of Web privacy. Our blackout campaign to oppose US SOPA legislation reached over 30 million people and we regularly work with standards, regulatory and legislative groups to represent user needs and Mozilla values.”

Firefox 17 brought with it Facebook integration. The best feature of Firefox 17's Facebook integration is that it keeps users logged in and connected irrespective of the website they are navigating. Users can chat, view notifications, messages, friend requests, without leaving the comfort of the page you are navigating. You can read up on how to integrate Facebook with Firefox here. 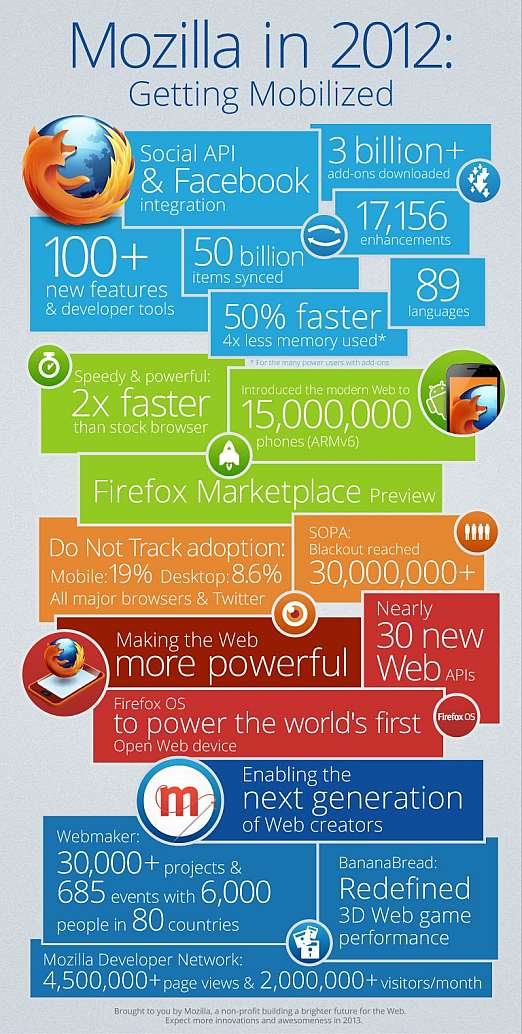