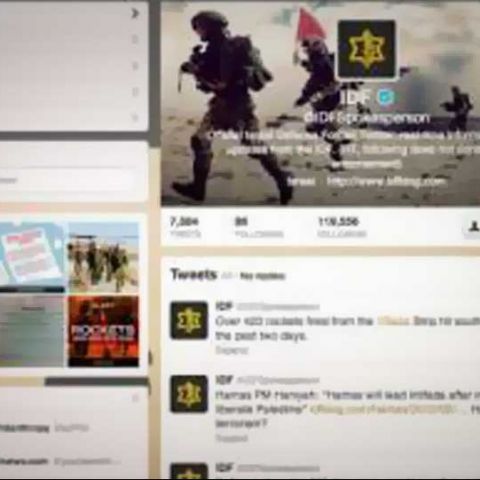 The Israel Defense Forces (IDF) and Palestinian Islamist group Hamas have opened a new front, and this time, the platform of choice is the popular social networking website, Twitter.

This began on Wednesday when IDF began tweeting about its military operations at the Gaza Strip. The IDF also uploaded a video of an air strike that killed Ahmed Said Khalil al-Jabari, head of Hamas' military wing. It did not take long for Hamas to respond, with Izz al-Din al-Qassam Brigades, the armed wing of Hamas tweeting, "Our blessed hands will reach your leaders and soldiers wherever they are (You Opened Hell Gates on Yourselves)".

Hamas has, for the last couple of days, been giving Live commentary of its rocket an mortar attacks on various Israeli targets, including what it labels military bases and also the city of Tel Aviv. “Al Qassam Brigades bombed multiple #Israeli targets with 527 projectiles including Tel Aviv since the start of operation”. In respond to this Hamas tweet, the IDF responded saying, “Over 420 rockets fired from the #Gaza Strip hit southern #Israel in the past two days. Hamas PM Haniyeh: “Hamas will lead intifada after intifada until we liberate Palestine. How is this not terrorism?”

This is the first time we have seen social networking being used by defence forces of one country to announce military operations. Also, this gives them a very solid platform of responding to what they believe are lies being spread by Hamas about attacks on civilians. The IDF tweeted just a while back, “Before action, the IDF disperses warning leaflets calling all civilians to evacuate the area.” They also gave a link to their blog post that shares more information.

What is rather interesting is how Twitter will respond to all this. The social network’s own terms and conditions state, “Violence and Threats: You may not publish or post direct, specific threats of violence against others." Clearly, Twitter is in a tough spot. It may not want to become an entity that is known for editorial censorship, but then again, it doesn’t want to be seen as someone who can't even adhere to their own rules and terms. No one really knows if Twitter will even interfere in this online warfare between IDF and Hamas spokespersons.