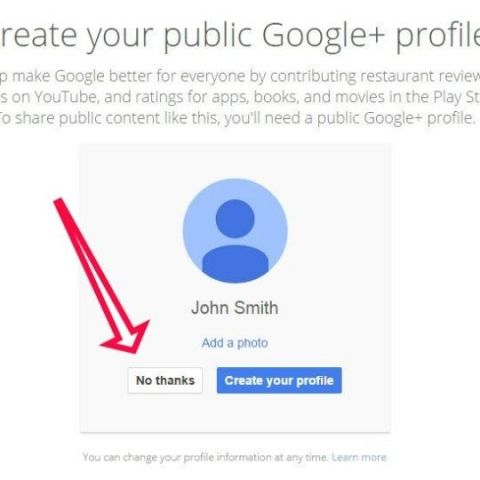 Google adds a "No thanks" option for creating Google+ accounts when signing up for Gmail.

Google is no longer forcing users to make Google+ accounts when they sign up for a new Gmail account. Now a new ‘No thanks’ button will be added to the page which will give users a choice whether their Google+ page should be created alongside the email account.

According to a report in Marketing Land, Google has quietly dropped the requirement that new users create a Google+ profile when they sign up for a Google account. After Google's social network Orkut did not take off, Google started focusing on Google+ making it mandatory for Gmail users to have a Google+ account by default.

A Google spokesperson stated "we updated the signup experience in early September. Users can now create a public profile during signup, or later, if and when they share public content for the first time (like a restaurant review, YouTube video or Google+ post)."

Google social network Google+ never took off and since Vic Gundotra left the company in April, the internet giant has reportedly put the service on a backburner. Now this change will lead to even fewer signups on the social network. According to reports Google is planning to launch its Photo service as a standalone app without Google+ accounts.

Google recently acquired Polar a company that specializes in creating online polls to get "instant opinions on anything." The deal is an acqui-hire where Polar’s founder Luke Wroblewski and his team will be joining Google. According to Dave Besbris, Google’s vice president of engineering for Google Plus, the team will be working on improving Google+ for mobile.