Google launches a $50 million initiative to inspire girls to code 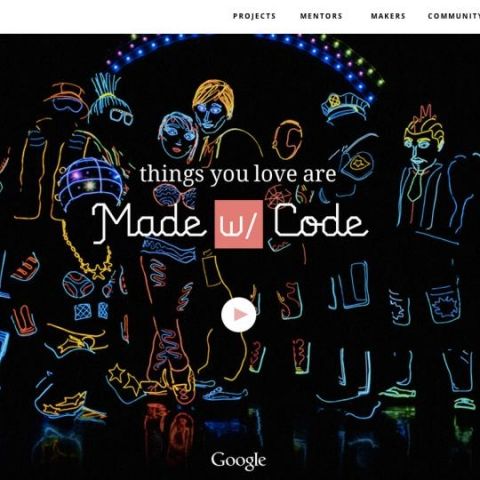 Google announced a new initiative called 'Made with Code' to encourage more girls to learn how to code and close the gender gap witnessed in tech-industry currently. The company unveiled the initiative at the recent Google I/O 2014 conference.

Google plans to spark an interest of coding programs among young women and have them apply those skills in their own individual passions. Google will be pumping $50 million of funding, over the next three years into the program. The internet giant has tied up with Girls Inc., Girls Scouts of the USA, Chelsea Clinton, MIT Media Lab, Mindy Kaling, Girls Who Code, Techcrunch and the National Center for Women and Information Technology for the program.

In a post on Google’s official blog, YouTube CEO Susan Wojcicki said there are “far too few women and far too few young girls” in the technology field, and that less than one percent of high school girls express interest in majoring in computer science.

“Coding is a new literacy and it gives people the potential to create, innovate and quite literally change the world,” Wojcicki said in a statement. “We’ve got to show all girls that computer science is an important part of their future, and that it’s a foundation to pursue their passions, no matter what field they want to enter. Made with Code is a great step toward doing that.”

Last month, major tech companies including Google, Yahoo and Facebook had released their employee disparity report. Google revealed that 70 percent of its employees were males while 30 percent were females. The report also states that tech and leadership positions at the company are even more male-dominated with about 80 percent of those jobs being held by men.

Google launched ' Help Getting Women Online' initiative in India last year which aims to help 50 million women to get online by 2014 year-end. India has over 200 million internet users, but only one third are women. The internet giant stated that lack of knowledge on how to use the Internet has been one of the biggest barriers for women to get online. The initiative has set up a website as well as a toll free number that will help women get answers to any queries they have about the Internet.