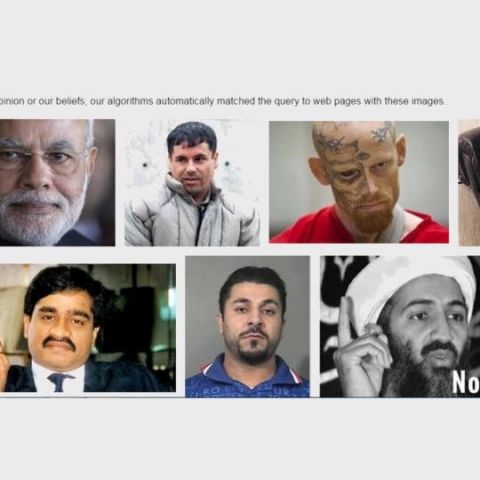 Google search results for the 'Top 10 Criminals of the world' features pictures of India's Prime Minister Narendra Modi. Though the internet giant has apologised for 'any confusion or misunderstanding', the images continue to appear in the search results.

Google stated that the results to the query "top 10 criminals" was due to a British daily which had an image of Modi and erroneous metadata. The internet giant says that the image search results were drawn from multiple news articles with showed images of Prime Minister Modi and his statements with regard to politicians with criminal backgrounds. However, the search engine clarifies that none of the news articles link Modi to criminal activity. The top 10 criminals list shows PM Modi's image along with the like of underworld don Dawood Ibrahim, Hafiz Sayeed, slain al-Qaeda chief Osama bin Laden, and Ayman al-Zawahiri as well as Bill Gates and Delhi chief minister Arvind Kejriwal among others. Thousands of Modi supporters turned to Twitter to vent their anger over the images, leading to the internet giant making the apology.

A Google spokesperson said in a statement, "These results trouble us and are not reflective of the opinions of Google. Sometimes, the way images are described on the internet can yield surprising results to specific queries. We apologise for any confusion or misunderstanding this has caused. We're continually working to improve our algorithms to prevent unexpected results like this."
On Wednesday #Top10Criminals was the number one trend in India on Twitter. Analysts suggest that the trending hashtag #Top10Criminals will make the situation worse for PM Narendra Modi, as people have started searching ‘Narendra Modi’ and ‘Top 10 Indian Criminals’ more. This is leading to the an increased mention of “Narendra Modi” and “Top 10 Criminals” together, so Google’s search algorithms will correlate the name with the phrase even more. Google has also recently partnered with Twitter to access the company's firehouse data stream. According to the deal Tweets will show up in more prominence in search results in real time. With more people tweeting on the Criminal list and Modi, this could also further attribute to Modi's images showing in the top criminals list.