The new Gmail redesign brings a confidential mode that is beefed up for security as well as a bunch of productivity-enhancing features.

Gmail does not look the same anymore. Google has strengthened the security of the world’s most popular email client and given a visual redesign with the aim to make the Gmail experience more productive and useful. The redesign which was leaked earlier this month, has introduced some of the features from Google Inbox, the productivity-focused app, including - email snoozing, nudging and a nifty confidential mode.

The redesign is now live on the web version of Gmail and will be rolled out globally in a phased manner. This means, you might not get the redesigned look right away. Google is sending invites to people to opt in instead of just turning it on for people automatically.

Straight off, the security feature is the new Confidential Mode. The new Gmail will allow users to send a mail with an expiration date as well as the option to revoke it. The underlying logic is that Google will not send the mail directly to the receiver. He will only get a link to the confidential mail instead which can be accessed via the recipient’s Gmail account or any other mail service they use. Either way, the sender remains in charge of the content of the confidential mail and can decide how long the recipient can access the content.

Furthermore, Google has introduced Integrated Rights Management (IRM), which has been there as a business-centric feature, but now will be available to any and everyone. The feature allows users to block copying, downloading, forwarding or printing certain emails. There’s also two factor authentication on a per-message basis, available in the Confidential Mode where the user can request the receiver to authenticate themselves via a passcode sent as a text message to see the content.

However, the two new security-enhancing features are not currently available even to people who are on the redesigned Gmail. Google has promised the features will be rolled out in the coming weeks. 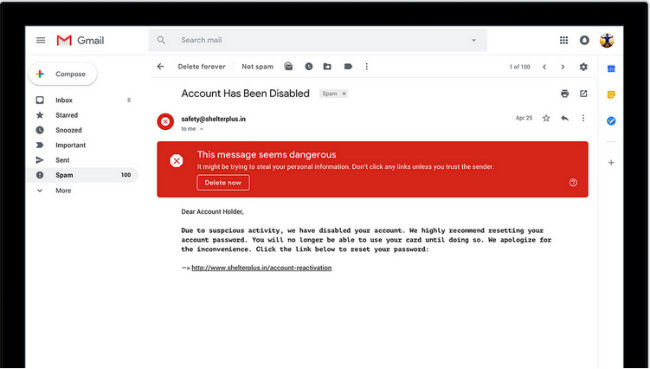 Email snoozing, a popular feature on Google Inbox is now integrating directly into Gmail. Every mail will have a hover menu around housing the most common actions including delete, mark as read, snooze for later or archive the mail. The menu pops up as you hover the cursor over the mail. Also, just like Inbox, you can tap and open email attachments directly from the inbox without opening the mail. 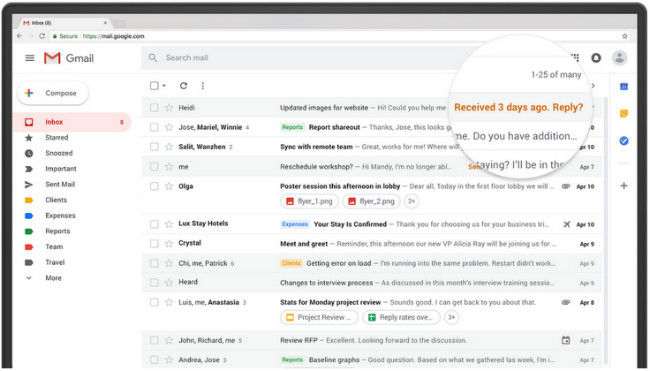 Google will also nudge users about important mails they might have forgotten about. Gmail will recognise mails which have time-sensitive importance and keep resurfacing them for action. It works a lot like Google’s Smart Reply, which is also present in the redesign. 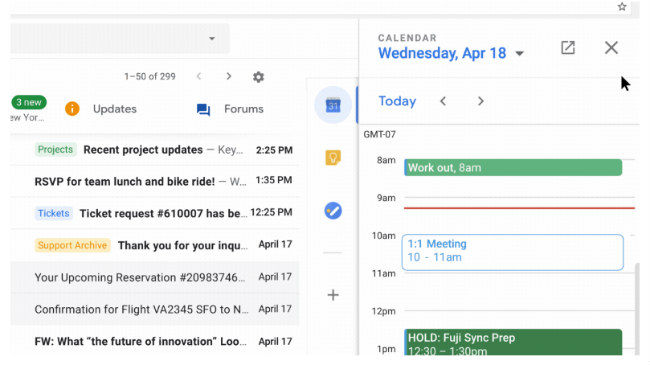 The visual changes bring Gmail more in line with Microsoft’s Outlook. There’s a new right hand side panel that integrates G-suite apps like Google Calendar, Google Keep, Google Tasks and more. The side panel keeps your meetings and appointments organised, allow you to take notes, all without leaving the inbox.

Other changes include the ability to collapse the left-side panel that houses the different inboxes and Hangouts to make more space. There’s a native offline mode which will allow Gmail to work in the same UI.

The mobile app is also getting a few new features. High-priority notifications, which are already there in the Inbox app will be available. Google will use machine-learning algorithms to select mails that you’ll need to be notified about and keep mails that don't need immediate attention for later. Yet another useful addition is the one-tap unsubscribe prompt in the mobile app that will allow users to unsubscribe from newsletters that they had signed up.

Gmail has had undergone some changes over the years it has existed, but this is the biggest overhaul of the popular email service which boasts of 1.4 billion users. The new changes will surely prove to be useful, but it might also alienate users who are already used to older UI. But nevertheless, the UI is now more future-ready than ever.