Firefox aims to make file sharing on the web easier as well as private. The service has the tagline, “Private, By Design” and Firefox claims all the files are encrypted end-to-end. 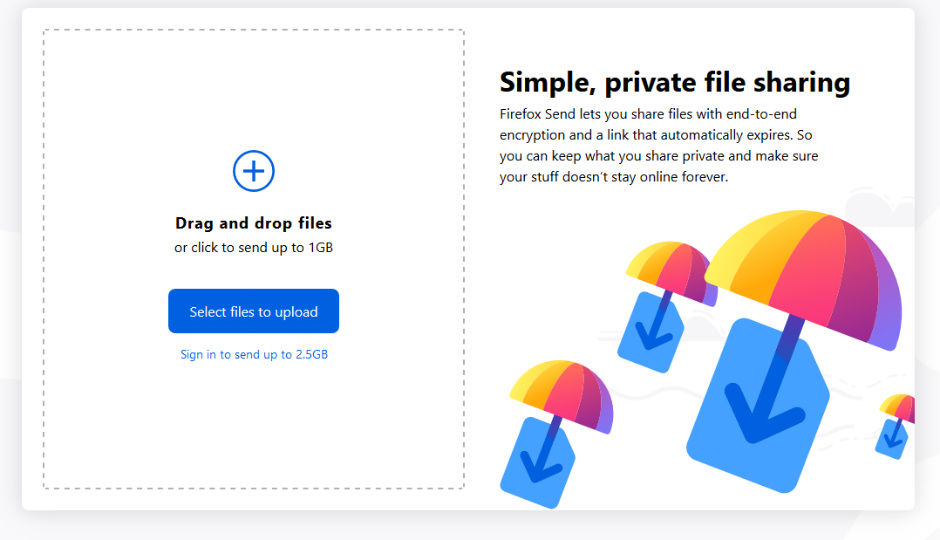 Mozilla has launched a free end-to-end encrypted file sharing service called Firefox Send. The service debuted as a “Test Pilot” experiment back in August 2017, and now, it’s officially available to the public. The file sharing service allows one to send files up to 2.5GB in size using the Firefox browser, all the while keeping it encrypted end-to-end. The receiver will get a link to download the files once the upload is complete. The link automatically expires after sometime to protect the data shared.

Mozilla increased the file size limit from 1GB back when it launched to 2.5GB when the service went official. However, unless you sign up for a free Firefox account, you can only share files up to 1GB.

The end-to-end sharing service is pitched as an alternative to email where file attachment sizes are abysmally low. For instance, Gmail allows you to share files up to 25MB in size. Anything larger is shared via Google Drive which again takes up cloud storage.

To use the service, head to send.firefox.com and upload the file. You will have the option to set an expiration time. Furthermore, you can also choose to have the files protected by a password before sharing.

Once the upload is complete, Firefox will give you a link which you will have to share with the recipient. All the receiver has to do is click on the link and the file will start downloading. The recipient doesn’t need to have a Firefox account to download the files.

Firefox aims to make file sharing on the web easier as well as private. The service has the tagline, “Private, By Design” and Firefox claims all the files are encrypted end-to-end. Hopefully, the new tool will attract more users to Mozilla’s apps. The service will have others like WeTransfer for company. However, this is an indication that we have come a long way from unsafe peer-to-peer sharing services like LimeWire which was notorious for security breaches. The service is presently only available for the web. The Android app will be available in beta later this week.