Facebook to rollout ‘Watch’ platform in India between January-March 2018: Report

The Facebook Watch platform will available on Facebook’s mobile, desktop and TV apps. Content on 'Watch' will be presented in the form of episodic shows, which will follow a particular theme or storyline. 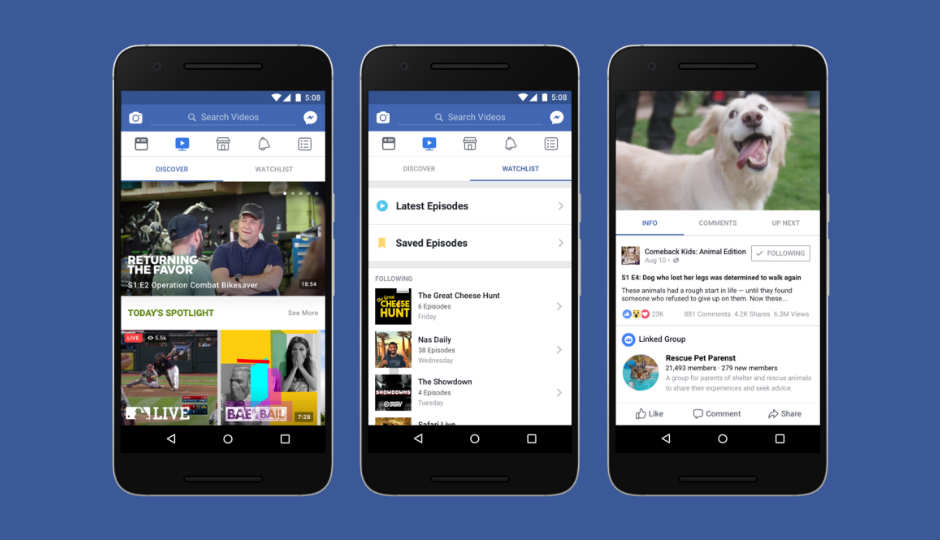 Facebook to rollout ‘Watch’ platform in India between January-March 2018: Report

Facebook Watch, the social network’s dedicated videos platform available only in the US as of now, is reportedly heading to India early next year. The Ken reports that Watch will be launched in India sometime between january and March 2018.

In the US, Facebook Watch is available on mobile, desktop and TV app of the platform. Watch will display personalised video recommendations to Facebook users. Content on Facebook Watch will be presented in the form of episodic shows, which will follow a particular theme or storyline. For instance Technology, lifestyle, How Tos and more. Watch will also consist of both Live and pre-recorded video content.

Facebook also utilises the Watch platfom for Live sports viewing and this can be a big opportunity for the social media giant in India, given the country's love for cricket. Back in September, Facebook placed a $600 million bid for the digital distribution rights of IPL matches in the country. However, the company lost to 21st Century Fox's Star India unit which bid a whopping $2.55 billion for both TV and digital rights.

The frequency of episodes on Facebook Watch can vary from weekly to daily, depending on the type of show. Users of Facebook’s Watch platform will be able to create a Watchlist of their favourite shows, similar to creating lists on streaming platforms like Netflix and Amazon Prime Videos.

Facebook is following a personalisation approach with Watch, again something we have seen streaming companies adopt in the past. Users will be able to discover new shows picked according to what their friends and communities are watching.

Facebook will also present various show categories such as - “Most Talked About”, listing shows that are conversation starters, “What’s Making People Laugh”, including shows where people have used the “Haha” reaction, and “What Friends Are Watching”, for shows that a user’s friends are watching.

Further, Watch will give users the ability to comment and react to shows while watching them. Users will also be able to chat about the shows and discuss them on dedicated Facebook groups for the shows.

Good news is that creators will be able to monetisation their content on Facebook Watch through ad breaks. Facebook has been talking about mid-roll ads for a while now.

“We’ve been testing Ad Breaks over the past few months, and we will be slowly opening up availability to more creators to ensure we’re providing a good experience for the community. Creators can also create sponsored shows using our branded content tag,” Nick Grudin, VP Media Partnerships for Facebook, wrote in a blog post when the platform was launched internationally in August.

Facebook has been looking to hire professionals for the platform in India and has posted roles for a product marketing manager, strategic partner managers, and data analysts for the platform, all based out of Mumbai.

The social network’s foray into India’s video streaming market only makes sense as all reports point to video viewing in the country going north. The total video traffic in India is expected to be 75 per cent of the total internet traffic in the country by 2020, according to the 11th Annual Cisco Visual Networking Index (VNI) Forecast. The report indicated that networked devices in India will go up to 1.9 billion in 2020, up from 1.3 billion in 2015. Cisco’s report also predicted that average broadband speeds will go up to of 12.9 Mbps by 2020, facilitating more video viewing.

In the US, Facebook also sponsors certain community-oriented and episodic shows on the Watch platform. It remains to be seen if the company plans to do so in India as well.

The 2 billion plus strong community of Facebook members can expect the company to invest much more in original and premium programming. We have heard that that Facebook is willing to invest as much as $3 Million per episode in production costs for its original shows. These Facebook originals were expected to debut sometime in late August this year, but looks like they will be delayed, given the Watch platform is just beginning to grow.

With original programming, Facebook will join the growing premium TV streaming space, which even Apple is planning to jump into with its orgininal shows. In fact, Apple's first two originals, part of its ambitious $1 billion videos bet, have just been confirmed.

Here’s what we know about Facebook and its original TV show programming plans so far.