Facebook has announced testing of a subscription feature for a limited number of groups. This feature is aimed at supporting group admins who are looking for ways to earn money while building safe and supportive communities on the social media platform. Facebook says that admins currently do this by creating an additional subscribe-only group, alongside their existing group, and re
ly on additional tools to keep track of and collect payments. The new subscription groups have been created to make this process easier for admins by providing built-in tools and saving time in the process. Members will also be able to sign-up and manage the groups they have subscribed via the Facebook app for Android and iOS.

Giving an example, Facebook states, “One such community leader looking to support her work, Sarah Mueller, started a group called Declutter My Home as a way to inspire and motivate others to tidy up their apartment or house. The group quickly became an active community for helping tens of thousands of people across the world to reduce clutter in their spaces. With her new subscription group, Organize My Home, members will be able to work together on bite-sized projects, and have access to easily actionable checklists, tutorials, live videos and more to help with home organization.” There is currently no mention of when the feature will be rolled out broadly. 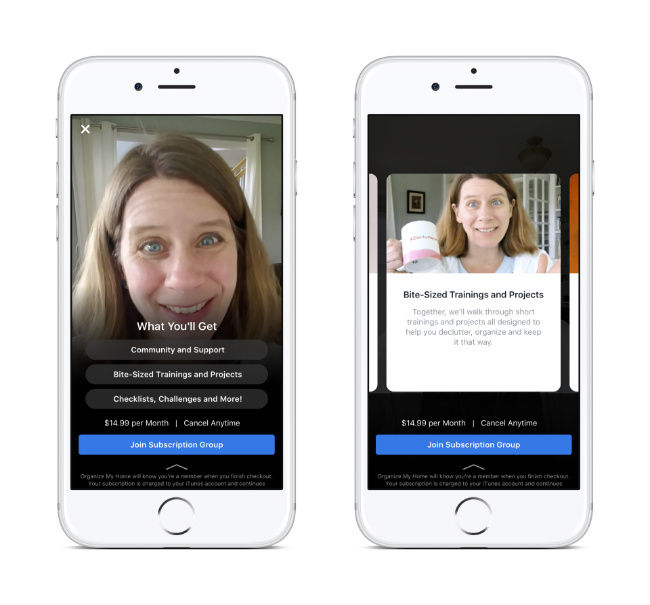 This new announcement comes soon after the social media platform unveiled some new features tailored for creators. The company is now rolling out features like polling and on-demand videos for gamification of Live broadcasts to make them more engaging. There is also a Brand Collabs Manager feature, which will help creators be discovered by brands for collaborations and help brands search and find creators with whom they can “potentially establish deals and partnerships.” The feature was under testing with a limited set of partners but is now available for more users. Facebook announced some more features for creators and you can read more about them here.