Facebook's new tool will help users inform their family that they are safe during a disaster. 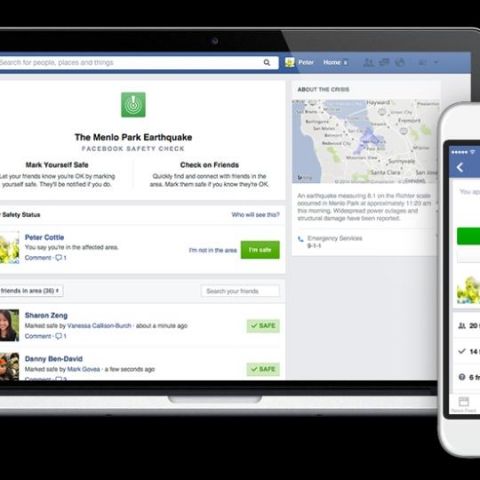 Facebook Inc. is launching a new tool called 'Safety Check' that lets users notify friends and family that they are safe during or after natural disasters. Facebook will be rolling out the tool globally for its 1.32 billion users on Android, iOS and desktops. The feature will be available in "feature" phones as well which will be especially helpful to users in developing countries.

The Safety Check tool will allow users to inform their friends and family that they are OK after earthquakes and other disasters. Once you activate the tool, it will be able to determine the users location using the city they have listed in their profile, or the city where they are using the Internet last or the last location they've shared online. Safety Check will send them a notification asking if they're safe, if they are in an area affected by a natural disaster. Once the user says yes, their Facebook friends and family will be notified.

The feature grew out of a disaster message board that Facebook engineers created in 2011 following the earthquake and tsunami in Japan. "Our engineers in Japan took the first step toward creating a product to improve the experience of reconnecting after a disaster," says Naomi Gleit, vice president of product management at Facebook. "They built the Disaster Message Board to make it easier to communicate with others."

Earlier this year, Internet giant Google partnered with Twitter to announce its Public Alerts service. The service will send out alerts from sources like the National Weather Service and will include relevant tweets via Google Now, Search, Google Maps and the Public Alerts Website.