Facebook has introduced a new platform for live and recorded shows. Called ‘Watch’, the platform is Facebook’s big splash into original TV-style streaming content. The new Watch platform will be available on Facebook’s mobile, desktop and TV apps. Watch will initially be made up of video content from select Facebook creators, some of it sponsored by Facebook itself. This video content will be presented in the form of episodic shows, which will follow a particular theme or storyline. Episodes frequency will vary from weekly to daily, depending on the type of show. Shows on Facebook Watch can be live streamed or presented in a pre-recorded format.

Users of Facebook’s Watch platform will also be able to add shows to a Watchlist, the same way one would add shows of their interest on streaming platforms like Netflix and Amazon Prime Videos. Facebook is following a personalisation approach with Watch, again something we have seen streaming companies adopt in the past. Users will be able to discover new shows picked according to what their friends and communities are watching.

In its blog post announcing Watch, Facebook mentions that creators will be able to “earn money for their work.” Monetisation of content on Watch will be done through ad breaks, which might be a reference to the mid-roll ads we have been hearing about for sometime now. “We’ve been testing Ad Breaks over the past few months, and we will be slowly opening up availability to more creators to ensure we’re providing a good experience for the community. Creators can also create sponsored shows using our branded content tag,” writes Nick Grudin, VP Media Partnerships for Facebook. In addition, Facebook will be funding certain shows “to help seed the ecosystem, gather feedback, and inspire others.” Creators will be able to utilise ‘Show Pages’, another new platform, which will “makes it easy for people to understand what a show is all about, watch episodes and other related videos, and connect with communities that have formed around a show.” 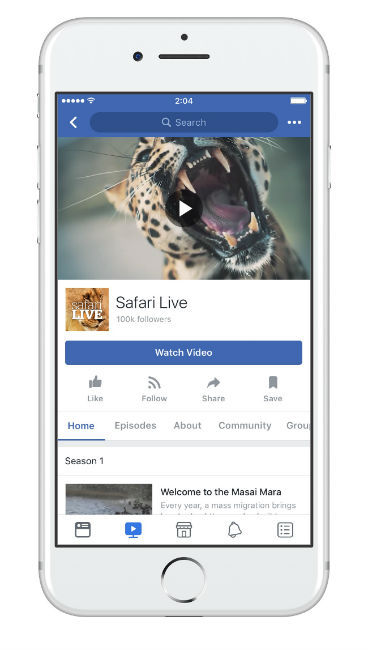 Facebook has highlighted some of the shows that will be available on its Watch platform. For instance, Nas Daily will publishes a daily show where he makes videos with his fans from around the world. Another community engaging show will see Abby Bernstein, a New York Times bestselling author and motivational speaker use a combination of recorded and live episodes to connect with fans and answer questions. Then there are shows that will follow a narrative arc, like Tastemade’s ‘Kitchen Little’, a show where kids instruct professional chefs how to cook food after watching instructional videos. Live events like Major League Baseball will also be broadcasted on Facebook each week.

There are signs we will see much more content from Facebook on the new Watch platform going forward. The social media giant with over 2 billion users writes, “We think Watch will be home to a wide range of shows, from reality to comedy to live sports. To help inspire creators and seed the ecosystem, we’ve also funded some shows that are examples of community-oriented and episodic video series.”

There’s already talk of Facebook introducing original shows in hopes of creating a returning user base for its videos. We have heard that the company is willing to invest as much as $3 Million per episode in production costs for its original shows. These Facebook originals were expected to debut sometime in late August, but looks like they will be delayed, given the Watch platform has just made its way on the social network. Here’s what we know about Facebook and its original TV show programming as of now.

As for Facebook Watch, the platform is open to a limited audience in the US, as well as a limited number of creators in the country. Facebook says a wider roll-out in the US can be expected soon enough, while there are no indications of the platform coming to other countries as of now.